Sticking with this morning's Broadcasting House on Radio 4, blog favourite Hugh Sykes was reporting from Mozambique.

Now, much as I found Hugh's report to be interesting, well-crafted and not overly verbose, I did smile at the Guardian-like focus of his report: gender equality and sexism in Mozambique.

"How very Guardian! How very Hugh! How very BBC!", I thought (though not at the time I must admit).

Hugh is off to report from other African counties in the coming days (hence his recent lack of tweets). Will he be checking the privilege of successful people in Ethiopia?

One thing I did learn from his BBC BH accomplice Manveen Rana on Twitter is that ex-Marxist-Leninist Mozambique has something of a North Korea-like fetish for Godzilla-sized statues of its dead leaders: 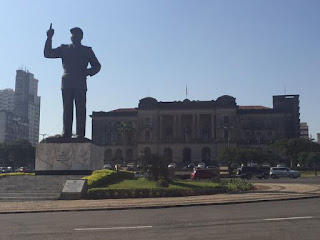