No one from the BBC was prepared to appear on this week's Newswatch to face questioning from Samira Ahmed over the BBC's coverage of the 'British' jihadis.

One viewer emailed the programme to say:

I cannot believe how sympathetic the BBC news coverage was to the death of suicide bomber Talha Asmal. The BBC were so consumed with sympathising with him for being 'groomed' that his victims didn't even receive a mention.

Indeed, that was the very thing that struck me about the BBC's reporting (and many others too, from what I've read elsewhere). The actual victims of Talha Asmal - the dead Iraqis -  pretty much vanished from view (as you can see from the BBC's main online report on the story).

Who were they? Oil workers? Soldiers? Just people in the wrong place at the wrong time? How old were they? Did they have children?

That's what makes Dominic Casciani's focus on whether British jihadis might be victims too all the more disturbing for me.

The BBC's coverage of the three Bradford sisters and their nine children slipping off to Islamic State territory has also raised eyebrows.

I suspect that many people will share Rod Liddle's view here:

The BBC and the Guardian are terribly concerned about them, worried about their safety. Me — I’m slightly less so, to tell you the truth. In the first place, I don’t see why we should restrict the movement of people wherever they might want to go — they wish to travel the world, do a spot of beheading and be blown up by a US airstrike, I say bon voyage. And if they can encourage a few more similarly minded people to do likewise, all the better. All I would add is — whatever you do, don’t let them back in. Any of them.

Secunder Kermani's opening report began by focusing on the weeping fathers and the "bewilderment" and "fears" of all and sundry at the apparently inexplicable turn of events.

Then, typically, the BBC reporter said:

Some question whether enough was done by the authorities to engage with the families...

...which was followed by his first 'talking head', Ishtiaq Ahmed from the Bradford Council for Mosques, saying this seemed "like a major failing by the intelligence services and other authorities".

(Secunder didn't challenge him about that).

Then the BBC reporter went to a primary school which two of the children attended to get the views of parents there and found they were surprised because everything's absolutely normal at that school (or so they said).

Secunder Kermani then turned to camera and informed us that "one youth worker in the area" told him that "some British Muslim women has expressed concerns to him to new government counter terrorism legislation meant that their children could be taken away from them just for being deeply practising Muslims and that perception was making some people more vulnerable to radical ideology".

Some Muslim women's groups want women to have more access to mosques so they can discuss contentious issues. "Britain's first female-governed mosque" could be opening soon in Bradford, and Bana Gora of the Muslim Women's Council was Secunder's second 'talking head', talking about it.

[That sounds 'progressive' but, just Googling 'Bana Gora', it appears that "female-governed" is a euphemism for "women-only", which sounds somewhat less 'progressive' in that segregated worship isn't exactly new to Islam].

It was then back to the fathers and the "daunting task" of getting their families back from ISIS.

That's the kind of BBC reporting that begs so many questions - the kind of questions Newsnight was hardly likely to pursue. (They just don't seem to think that way). 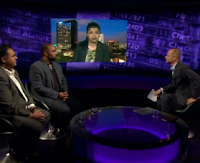 Then came a studio discussion - inevitably for Newsnight on such occasions - between three Muslims.

They were there to discuss the effectiveness (or otherwise) of the government's Prevent strategy.

We heard from Zubeda Limbada of Connect Justice; Fiyaz Mughal of Faith Matters [and Tell Mama]; and Raza Nadim of the Muslim Public Affairs Committee UK (who talked over every one else, and blamed foreign policy and alienation.)

It's a nice, safe line of questioning for a BBC journalist to pursue: Blame the government and the authorities, not Muslims (and Islam).

Returning, however, to Newswatch...

This was the statement the BBC gave the programme over its Talha Asmal coverage [with some asides from me]:

As well as reporting the attack [whilst almost forgetting about the victims], the radicalisation of young British Muslims is a key element to this story [which the BBC tends to report through Muslim/non-'controversial' non-Muslim voices], and like other news organisations [a classic BBC ploy that!] we interviewed people who knew him to provide context [but didn't the BBC do far too much of that, and give far too much prominence to it? - all those people saying the suicide bomber was nice and kind]. There has also been comment by senior and local political leaders in the UK which we also reported on [though, as per the previous post - and earlier ones here at ITBB - not entirely fairly or accurately]. We will continue to follow this story and report on all aspects ["all" aspects? I very much doubt that!] in a sensitive way [oh yes, it will be "sensitive" all right - "sensitive" especially towards the 'aggrieved' parts of the Muslim community especially, no doubt].

All of which raises the question: Is BBC News fit for purpose?
Posted by Craig at 17:04