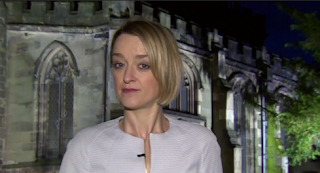 Still, still, still sticking with my exhaustive review of this past week's Newsnight (please keep awake at the back there!)...

The first part of Wednesday night's edition was given over to the Labour leadership debate.

That, in itself, wasn't biased. The programme had broadcast a special edition on BBC Two earlier that evening, projecting the whole snoozefest to the world,...

...but the BBC always broadcasts such things.

The BBC revels in such things.

Two Labour types - Blairite Philip Collins of The Times and somewhat more left-wing Helen Lewis of The New Statesman - followed up the post mortem (which revealed, again, that the BBC audience was peculiarly left-wing - especially for a Tory seat!), alongside a token Tory - Lord Finkelstein of The Times.

My only qualm here - a relatively minor qualm - is that Evan Davis demonstrated something our survey of Newsnight last year made very clear: that Newsnight is absurdly obsessed (like the Guardian) with 'wot Twitter thinks'.

I want to come back to Corbyn, because it really did feel, certainly in terms of the audience and the social media follow-up, that it was Corbyn who generated the most enthusiasm, right?

Later on the same edition, Newsnight's Nick Hopkins got terribly concerned about the missing Muslim sisters who have defected to the Caliphate:


Their story has horrified Britain. The three sisters and their children who have apparently abandoned their lives in Bradford for new ones in Syria. Today the news that those back home had feared: One has phoned home, saying she's in the conflict zone.

Much hand-wringing followed, featuring a police spokeswoman and the latest DPP.

Previous comments threads here at Is the BBC biased? have dealt with the closing report and its subsequent discussion about the Battle of Waterloo.

I enjoyed it and there were some fascinating facts, but this was pure revisionist history, somewhat rife with straw men. (We all think - and were taught - that Napoleon was given a right royal whopping by good old John Bull. Apparently).

The Brits only won the battle because of luck, the weather and - above all - the Europeans. This was a lucky win, yes, but the strong German and Belgian contingent - the European "coalition" - was the key to Wellington's victory - despite the 'fact' that we Brits still think that Britain walloped the Frogs at Waterloo alone. Apparently. But we didn't. Apparently.