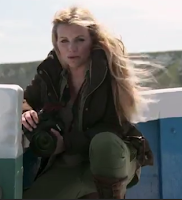 In the post above - which, by the Paul Daniels-like magic of Google Blogger, appears above this later post - I refer to my various, fleeting 'catches' of BBC bias this week.

There were two: Countryfile on BBC One and BBC Inside Science on Radio 4.

Both are prime examples of generally excellent BBC programmes that are, to those minded to worry about BBC bias, often scarred by BBC bias.

As for Countryfile, besides some excellent farming stuff, we had Ellie being staggered by gannets plunging into the sea (which was fun) and those pretty Rastafarian sheep I posted about the other day. There was also, inevitably, some heavy BBC plugging (the Countryside Calender).

Watchers of BBC bias, however, might have cavilled at three things:

The last one in particular did seem to be clearly arguing a case - a controversial case - possibly in breach of BBC editorial guidelines [but, given that he ended with a 'balanced' question (his get-out-of-jail-free card) and featured people from the 'other side of the argument', that would be very hard to 'prove'].

All but one of those listener responses (reporting positive and negative stories about female experiences in science) got an uncritical hearing. The exception? This one, from Michael:

Every week I listen to your programme to find out about science, but this week the programme was completely devoid of any science. Equality in the work place is a very important issue but there are lots of programmes who deal with these issues. Please just stick to the science and leave these issues for others to deal with.

Well, Michael and others, it is a valid point [meaning, as you'll see, that it's NOT a valid point at all!] but I believe that science is part of culture, not outside of it. The overwhelming majority of the content of Inside Science does concern (global warming) new discoveries or the process of discovery, but the culture in which that research is done is also science, and that is done by people. My mission on this programme is to show how science works - or doesn't - from beginning to...well, there is no end. Lab life is part of that and social issues are part of that package.

BBC Inside Science can be fascinating but Adam's wrong not to realise that his mission is a mission that might appeal to his colleagues at the Guardian/BBC but might not be one wholly appreciated by people beyond his circle (like Michael) - especially if it's skewed too blatantly in the direction of a cause, as BBC Inside Science can sometimes - as with last week's edition - give the impression of being.
Posted by Craig at 17:27