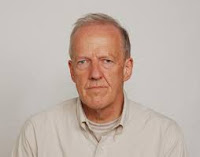 Hugh Sykes was back on today's The World This Weekend on Radio 4 (with the aforementioned Mark Mardell) and his report from the outskirts of Mozambique's capital played right into Mark Mardell's hands.

(Mark's hands opening with references to King Canute and his pointed attempts to vainly hold back the tide).

Hugh's Mozambican interviewee said "The world is a global world. There's no way of stopping the wind with the hand".

That Canute-like reference from the former Mozambican prime minister about the wind and the hand was preceded by this from Hugh:

But before this happens, that's a long-term goal. In the meantime there is political anxiety...panic...about migrants "flooding" countries like the United Kingdom. Do you think that the United Kingdom, and maybe other countries, Northern Italy for example, are saying, 'We don't want any migrants from Africa. We have to stop this'.