I switched on the radio in the night, as you sometimes do when you can’t sleep. It was a documentary called “The Documentary” and the episode was a story about the Tibetan Women’s Football team, the “Snow Lionesses”. 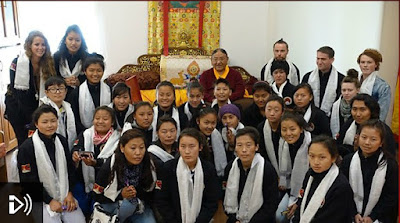 It seems a motley crew of aspirational  young Tibetan women football players had travelled from afar to a training camp, where they were to be coached with the aim of playing a match in Delhi in the hope of Tibetan women’s footie being recognised by FIFA.

You know that amusing (to us) habit people have in certain countries, mainly Africa, of naming children after strange things or famous people? I heard of a family from Malawi who called their offspring “First Gear,” “Second Gear”, “Third Gear”, and the youngest “Reverse.”  Well, the Tibetan women’s team had mostly Tibetan sounding names, bar one named “Michaeljackson”.

The documentary featured tales of hardship and strife in the name of recognition by FIFA. I wasn’t sure what the message was, especially in the light of the recent troubles surrounding FIFA.
The motive is political - to show Tibet is not part of China, but in the middle of the programme, one team member said:

“We are playing football, we are not playing politics...(FIFA )would recognise our Tibetan women’s team” [..] “they recognised some other non-sovereign counties, like Palestine.”

Then the presenter, whose name I didn’t catch, said:

“Weeks before the camp began, Palestine played a friendly international with the People’s Republic of China.”
Oh noes, I thought. What has Palestine got to do with this? Is there a Palestinian women’s team? I think not.

A hoarse voice began:
“We think that such a gesture has its deep dimension. It’s a wake-up message to the Palestinian people that we are still committed to just cause”.

Then the BBC presenter said:

“Head of the Palestinian football association general Jibril Rajoub speaking to the BBC world service before the match.”

What? What did that rogue Rajoub who had just failed to get Israel expelled from FIFA have to do with the Tibetan women’s football team??

This article “Could Israel get Booted Out of Soccer?” explains why the BBC shouldn’t be airing the wisdoms of Jibril Rajoub without clarifying that his aggressive politicising of the game of football is a million miles away from the apolitical image that FIFA is keen to project. 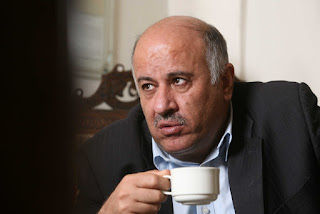 “Following 15 years in prison for throwing a grenade at Israeli soldiers, Rajoub was freed in 1985 along with 1,149 other prisoners in exchange for three Israelis taken hostage by the Popular Front for the Liberation of Palestine. Rajoub threw away his newfound freedom by resuming (and being repeatedly arrested for) militant activities in the ensuing two years. He eventually became an aide to Yasser Arafat, serving as the head of the Palestinian Authority’s Preventive Security Force after Arafat’s post-Oslo return to the West Bank. As security chief, Rajoub was frequently accused of facilitating the torture of prisoners and political opponents. In addition to the PFA, he also heads the Palestinian Olympic Committee, which he has used as a perch to demand Israel’s expulsion from the global sports movement. Unlike most sports administrators, who believe in (or at least talk publicly about) the capacity for sports to unite people of different backgrounds, Rajoub has promoted no such pretense—he has said that Palestinian sports are “one of the methods of resistance” against Israel, and has emphasized that Palestinian youth—over whom he holds a good deal of influence as the PA’s sports czar—have a key role in creating a “permanent state of confrontation.”

You can’t switch on anything these days without hearing some Palestinian grievance or other.
Jibril’s husky tones continued:

“Recognising the vey existence of the Palestinians sport entity means recognising a Palestinian political entity for us, a peaceful means for use as a tool to expose our cause, even  our suffering, for all those who are using sport, the values of sport in order to expose their national aspiration.”

So much for pleasant listening. Not conducive to being lulled back to sleep.


One good thing. Michaeljackson scored a goal. Good for her! 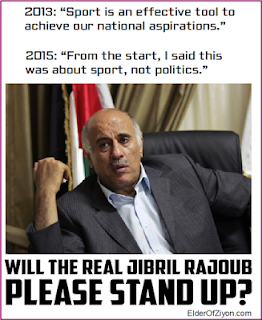