Have "Zionists" stolen one of Bari's shoes too?

BBC Watch has rightly amplified a pertinent question to the BBC posed by Hillel Neuer on Twitter:

.@BBCNews Why do you regularly interview a man (as a "leading UK Muslim") who believes "Zionists" stole his shoe? pic.twitter.com/Qd5jRbiOME
— Hillel Neuer (@HillelNeuer) June 14, 2015

Mind you, the promotion of crazy conspiracy theories never prevented Abdel Bari Atwan from being a BBC frequent flyer.

As Hadar notes, lots of media outlets (mainstream and non-mainstream - from the Spectator to the Ha'aretz, from Harry's Place to the Daily Mail) are reporting "leading UK Muslim" (and BBC regular) Asghar Bukhari's astonishing claim that "Zionists" stole his shoe.

Like many others before me, I'll have to preface the following screenshot with a statement: This is not a spoof! 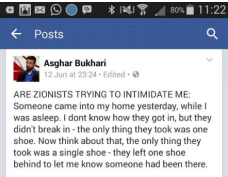 There's no sign of it yet, but hopefully BBC Trending will be on this story soon and making hay with it.

I'm not holding my breath though. The BBC's commitments to social cohesion will probably prevent them even from reporting this, and those invitations will doubtless keep on going out to Mr B.
Posted by Craig at 15:55