Emily Does the Charleston 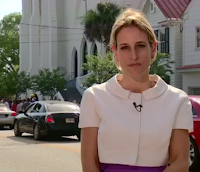 Today's posts - as you may have noticed - have concentrated on this past week's editions of Newsnight.

I think we've already found a high level of bias, but we could be accused of cherry-picking, couldn't we?

So let's plough on through the rest of it (over the following posts)...


Both last night's and Thursday night's editions discussed the murderous attack on a black church in Charleston by a white supremacist.

I don't think the BBC can be accused of bias in giving such prominence to such a shocking foreign news story, and the testimony from one of the victim's friends, coupled with the broadcasting of some of the families' messages of forgiveness to the killer. was truly remarkable - and an unconscious tribute to the extraordinary spirit of Christianity.

Still, besides the friend of the victim, the other two interviewees chosen by Newsnight were people our friends at Biased BBC might well call 'race hustlers'.

The BBC often turns to such self-appointed spokespeople for African-Americans when events like this happen, and they don't seem to think very much about balancing them with more moderate African-American voices - or anyone else for that matter.

And Emily - in the teeth of her interviewees (including their main 'race hustler') - persisted with the BBC's main theme, echoing President Obama, regarding the need for gun control in America.

Plus, in this age of BBC austerity (about which they're always moaning)...

...why on earth was Thursday's reporting for Newsnight from South Carolina done by the BBC's North America editor Jon Sopel (who did a decent enough job), but Friday's coverage was done by the newly-arrived Emily Maitlis?

Why send her, at licence fee payers' expense, to Charleston for 15 minutes of Newsnight when the highly-experienced Jon Sopel could have done the same job for much, much less cost?

Yet more proof of the BBC's jaw-dropping profligacy (at our expense).
Posted by Craig at 20:29