What if Saddam hadn't been toppled? 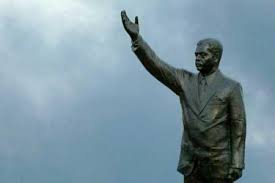 This morning's Broadcasting House engaged in a spot of counter-factual history, asking the question, "Would the world have been better off if we hadn't invading Iraq and Saddam Hussein was still in power?"

This Sceptred Isle historian (and former BBC defence and foreign correspondent) Christopher Lee apparently seemed to think so, imagining an alternative history which envisioning a world in 2020 where Saddam's Iraq and Hillary Clinton's U.S. were best buddies, with Saddam acting as America's Wyatt Earp in the Middle East, smashing Islamists across the region, sending special forces in to crush the revolt against Assad, stablising the Gulf monarchies, and working with the U.S. to thwart Iran's nuclear ambitions.

Paddy O'Connell then pursued the question with Patrick Cockburn of The Independent and former ambassador Sir Jeremy Greenstock, who helped run Iraq in the aftermath of the 2003 invasion.

Patrick Cockburn felt that the subsequent occupation had destabilised Iraq. Sir Jeremy, understandably (given that he was part of it) disagreed. Patrick Cockburn agreed with Paddy that there'd have been no Islamic State were it not for the West's actions back then. Sir Jeremy said that the rise of criminal gangs like IS can't be blamed on our actions. ("It's a creature of identity politics").

The bit that took me back though was this from Sir Jeremy Greenstock:

I think one of the lessons that fairly strong rulers in the Middle East have learned - and elsewhere have learned from the Arab Spring and the last ten years or so is that if you're going to repress you've got to do it very effectively and actually quite brutally. Assad wasn't effective enough, though he was brutal. In Iran we have a regime that keeps the people down really pretty effectively. We could look at China in this sort of respect. Israel has kept a very close hold on the occupied Palestinian territories. If you're going to use violence to govern, you've got to use it effectively.

It's odd how Israel Derangement Syndrome keeps rearing its ugly head - such as this comparison of democratic Israel with the world's undemocratic nasties.

Then again Sir Jeremy holds 'interesting' views on matters related to Israel. You may recall this from 2009:

Hamas, which in fact has no deep-rooted argument with the west or Christianity, no political alliance with Tehran or Hezbollah, no respect for al-Qaida and no “charter” for the destruction of Israel in its political programme, just wants the Israeli occupation to end.

This led Harry's Place to describe him as the "Ambassador for Hamas".

Needless to say, neither Paddy O'Connell nor Patrick Cockburn raised any objections to Sir Jeremy's slur against Israel there.

P.S. Christopher Lee, who must have been on the receiving end of a particular joke many. many times in his life, posted this charming tribute to his namesake earlier this week: