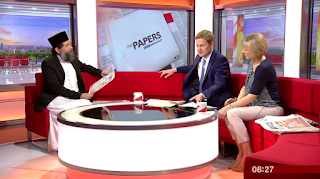 Should BBC presenters challenge their paper reviewers if they say something partisan (or false)? Or should they let them speak and allow heir viewers to judge for themselves?

I was wondering about that question during this morning's paper reviews on BBC One's Breakfast, featuring Shaykh Ibrahim Mogra of the Muslim Council of Britain as their guest reviewer.

The shaykh was talking about an article in The Observer which warns us about what we'd lose if we left the EU (and which was read from at some length). He ended his commentary by saying this:

My personal view is that I think a united Europe is a stronger Europe. I think we'll be more prosperous. We've seen the Irish and Portuguese examples of how they've managed to use EU money to modernise their countries. I was so delighted when I visited the Republic and saw how they had really managed to tap into the EU resources to take their country forward. So I think there is merit in supporting one another. Clearly some countries have to carry a bigger share of that burden, but then that's our duty to those who may have less and less capabilities. In the end, we all benefit.

I have to say that I was expecting the presenters to point out that their have also been some dramatic downsides to the economies of Ireland and Portugal in recent years, and that Greece, Spain, Italy, etc, aren't exactly proof either that EU membership always helps your economy in the long run.

Yet no such intervention came. Should it have done?

Incidentally, Breakfast didn't show the front page of The Sunday Times this morning:

Will that story get much coverage on the BBC in the coming couple of years?

(The BBC itself famously receives some funding from the EU).
Posted by Craig at 09:26