A week ago I posted a typically yawny, sarcy paragraph about the BBC's Shark from the Sunday Times's AA Gill.

I hadn't watched it myself at the time.

Despite his surname, AA didn't exactly seem bowled over by his many-faceted gill-bearing cousins. (He seemed, as ever, to be yawning at them).

Well, that's always been my impression of those fishy beasts.

This past, somewhat crazy week has finally given me the chance to catch up with Shark - the BBC's latest big budget Natural History Department blockbuster - and I found myself thinking that I would actually continue to pay to watch something this good, even if the licence fee were sent packing.

The sight of all of those divers swimming among a mass of great whites, all politely greeting each other (the sharks that is - though also extending that courtesy to the human divers too), certainly showed a new side to Mr & Mrs Jaws. [I feel much more relaxed about inviting them round for a dinner party now, though I'll have to check my 'Delia' to find out how to prepare a proper seal cocktail].

But that was only the start of it.

Oddly enough, some of the material didn't exactly help the programme's "Don't have nightmares" message. Those easy-going reek sharks, dozing their way throughout the day, allowing seals to tease them, proved endearing up to the point of nightfall. Then the ISIS-like terror they imposed on the reef showed them to be...er...sharks. And that mysterious snake-like shark, down in the dark, deep depths of the ocean, managed to combine two popular terrors (sharks and snakes), all in one. (I may very well have nightmares about that.)

Still, the programme mostly pulled it off. My admiration for sharks has never been higher. (I rank them well above politicians and BBC reporters now - whenever YouGov calls).

The extraordinary Arctic-dwelling sharks, blinded by parasites, who live alone in the dark depths were quite something (and not a little depressing). The shy Californian sharks which glow in the dark were no less remarkable. The leaping rays trying to leap higher than anyone else to wow the lady rays were jaw-droppingly unexpected and spectacular.

The BBC team behind this did a stunning job. I was absolutely glued to it, and gladly thank them for it.

My highlight? The section (in the third and final episode) with the professor and the giant manta ray.

The programme advanced the startling thought that the giant manta ray was an intelligent individual, genuinely enjoying playing with the professor...and, to be honest, it was hard to disbelieve them. (The science followed on - why the big brain for such a placid creature?)

That my highlight featured this particular professor, stimulating manta rays by swimming below them and blowing bubbles at them,... 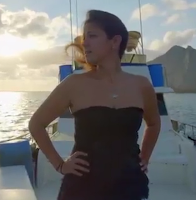 ...is not to be taken as evidence that my mind wandered somewhat.

Of course though, this is the BBC and such a series couldn't merely consist of science, and beautiful images of wonderful sharks and hot professors...

Man's inhumanity to shark had to be featured, and the final episode - after promoting the benefits sharks could bring us - showed the extent of the damage we wicked humans are doing to Jaws & Co. - and it certainly isn't pretty.

The stat given by the programme - which, as far as I can see, is about where most stats lie (albeit at the upper end) - said that we humans kill 120 million sharks each year...which is quite a thought.

As a 'BBC bias veteran', should I be questioning this? Should I be querying whether that stat is wrong and whether the BBC is playing the environmentalist card, emotively, in a biased fashion?

Beautiful white-tipped sharks, once numerous, are now nearing the brink of extinction. Is that something to be worried about? Or something the BBC wants me to worry about to advance the whole leftist environmentalist cause?

Call me 'brainwashed by the BBC' but I don't think so. People of a conservative persuasion are more than capable of treasuring wildlife. Sharks are being slaughtered in insane numbers, even though people (especially in the Far East) have far from insane reasons for slaughtering them (they like eating them).

This is me, Chris Packham, saying 'Good night'. Good night.
Posted by Craig at 17:42