"We want home, food and medicine as something like this, no?"

Catching up with some of the other charges of bias against the BBC from the past few days (while I've been away smoking my pipe)...

(In fact, I was a little surprised at the number of complaints I read about it, given that apparently hardly anyone watches it).

The offending report came courtesy of someone we've written about here before - BBC reporter Catrin Nye.

We too have accused her of having a pro-immigration bias.

I have to say that I think some of the criticism of this report was unfair.

It tried to do something a little different: to give voice to the concerns of UK truckers (in this particular case, from Northern Ireland) who are facing a relentlessly appalling situation.

Calais-based illegal migrants are attempting to enter the UK by hiding in, on or under trucks. And they, the truckers, are compelled by law to try to prevent them from succeeding...which, given that so many of the migrants carry Stanley knives and other weapons, brings considerable risks to their own well-being.

It's an absurd and dangerous situation, and British truck drivers should not be being put in that position. (It's a "something must be done" situation.)

The charges of bias arise from what Catrin Nye said to some of the truckers about the migrants:

Do you think if you were fleeing war you would do ANYTHING to get to safety, you'd do anything to protect your family. That's what they're doing.

Now that, of course, is one of the key questions here: Are these people genuine refugees or merely economic migrants? Catrin's assertion that they were "fleeing war" is nothing but an assertion. How does she know that they're "fleeing war"? 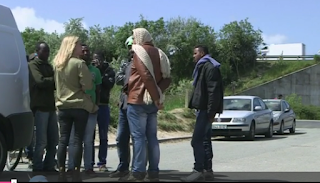 I think the problem can also be highlighted by the scene where she talked to some of the would-be illegal immigrants to Britain.

Passing over the potentially emotive way the camera lingered on a man on crutches...

One of Catrin's interviewees was called Talal Altayeb. He seemed a likeable chap and spoke decent English, and it was hard not to wish him well.

He then explained why he wanted to come to the UK:

We want home, food and medicine as something like this, no?

There was no mention of war or persecution from Talal, only the reasons of an economic migrant.

Yet how did the Victoria Derbyshire Show caption him?: 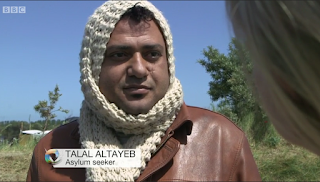 Also, Catrin quite often put an emotive line of questioning to the trucker at the heart of her report:

Are you sad seeing them?

But this must show you, this must illustrate perfectly the desperation. Is there any part of you that thinks, 'That's quite impressive actually, that someone would go to that length just to find safety?'

I suppose such questions are reasonable ones to ask, but...

...that question implying that all of those would-be illegal immigrants to the UK are fleeing war and that caption describing someone, who seemed (from his own words) to be essentially an economic migrant, as an "asylum seeker" really do raise doubts about the impartiality of this report, don't they?
Posted by Craig at 20:18