Can we forgive Zeinab Badawi? 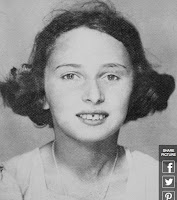 I happened to see HardTalk yesterday - the episode with Holocaust survivor Susan Pollack, a Hungarian born Jew who now lives in London, and Zeinab Badawi.

Zeinab, as we know, is inclined to wear her heart on her sleeve in terms of Hardtalk. She gave Mosab Hassan Yousef, the eldest son of a founder of the militant Palestinian movement Hamas a very hard time, and suggested he was a traitor to his father and the Hamas terrorist organisation.
On the other hand, she gave Suha Arafat an easy ride. Her most penetrating questions concerned money matters, and she appeared easily satisfied with Suha’s evasive responses.

We are aware that the BBC has a severe case of cognitive dissonance when it comes to the Jewish peoples. On the one hand they disapprove of Israel, are opposed to Zionism and sympathetic to the Palestinian version of the Israel/Palestine conflict, but on the other they have an almost mawkish curiosity about the Holocaust and love filming the personal stories of survivors, especially if recounted in great detail.
All that aside, I was pleasantly surprised that Zeinab drew out harrowing information from Mrs Pollack respectfully and gently in an interested, almost warm manner. I didn’t know she had it in her, as they say.  The only dissonance was at the end, where either the BBC or Zeinab chose to impose a jarring agenda about forgiveness.
I realise that many righteous people consider forgiveness a virtue. Something to aspire to, even under the most appalling and difficult circumstances. Remember Gordon Wilson who forgave his daughter’s killers after the Enniskillen bombing? Forgiveness is supposed to be cathartic, like throwing off a cloak of darkness.

"To forgive is to set a prisoner free and discover that the prisoner was you." - Louis B. Smedes

Perhaps it was with that in mind that the BBC decided to frame, in a rather negative light, Susan Pollack’s inability to forgive the Nazis on behalf of the millions they murdered.
This is the blurb on the HardTalk website:

Zeinab Badawi talks to British Holocaust survivor Susan Pollack, who lost fifty members of her family, including her parents, in Nazi camps. She recently gave evidence at the trial in Germany of former SS guard Oskar Gröning, who has been charged with complicity in the murder of 300,000 Jews. She says she cannot forgive him and welcomes the trial. What purpose can it serve today?

‘I wanted to thank him for having some human decency in accepting responsibility for what he has done.‘The victims, 70 years after liberation, with 300 others, they were all talking about their experience, falling apart – “poor me… what have they done to me?”‘I don’t forget what they have done to me. But I am not a poor person – I am a victorious woman who has been able to rise above the pain and forgive the Nazis.’

Allegedly other victims have said they see Eva Kor as a traitor, a sentiment the press seems to view with disapproval. All I can say is, who are they to judge? If that seems ambiguous - to clarify - I’m addressing the press, and for that matter, everyone else as well. Including me.

Neither Eva Kor nor Susan Pollack sought revenge in the form of imprisonment for Gröning, and both campaigned for enlightenment, awareness and vigilance against antisemitism and racism in any form.

Eva Kor’s response, like Gordon Wilson’s, was remarkable, but Susan Pollack was not self-pitying and at no point did she come across as saying anything resembling “poor me..”. She was an articulate, intelligent and extraordinarily un-bitter, philosophical person, in my humble opinion. 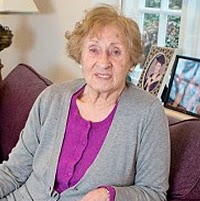 If Zeinab Badawi has a softer side, and is willing to let us see more of it, bring it on!
Posted by sue at 12:32