Another po-faced (or should that be Poe-faced?) BBC journalist has fallen victim to Godfrey Elfwick.

Here's what he said on the World Service about Star Wars:

The main bad guy...what's he called, Dark Raider?...is black, he has a deep voice, he listens to rap music. It’s just a really bad racial stereotype.

The BBC was widely mocked for taking his tweet at face value and inviting him on.

And today it happened again.

BBC Trending's Mike Wendling, reporting on the black civil rights campaigner who turned out to be white, spotted Godfrey on Twitter and - doubtless thinking he sounded 'right-on' enough to fit the tone of his piece - added his tweet to the article: 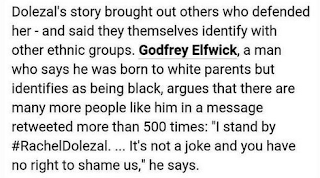 I stand by #RachelDolezal. 10% of all people are born #WrongSkin It's not a joke and you have no right to shame us pic.twitter.com/2qWlPMdQKg
— Godfrey Elfwick (@GodfreyElfwick) June 12, 2015

That passage has now been removed from the BBC website article and the following added:

Godfrey looks to have had a busy day: 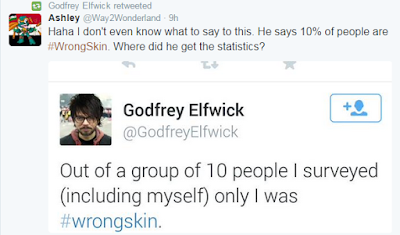 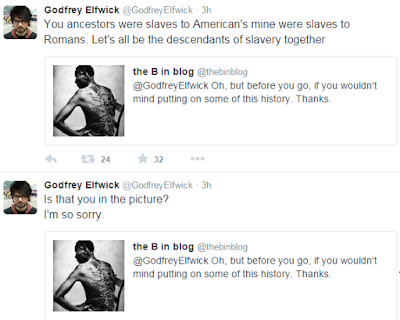 Update: I'm finding it hard to keep up with the BBC's continuing 'stealth edits' here. I'm nigh on certain this wasn't included the last time I looked, but here it is now:

Soon the hashtag #transracial was trending. Some were using it for jokes and satire, but others were making serious points, "People mad about RachelDolezal claiming to be black but you guys ok with Caitlyn Jenner. Make up your mind," tweets @PerfectLegend. Many users found the comparison wrong or even offensive: "There is nothing 'trans' about #RachelDolezal. Stop w/ the false equivalencies to transpeople. Rachel is a lying, deceitful fraud. The end." says @ReignOfApril

The BBC is constantly updating, it seems, and constantly making itself appear 'down' with the 'right-thinking' types that give every impression of inhabiting an increasingly large chunk the social media spectrum (except blogs about BBC bias, of course).

This 'stealth edit' was a clear riposte to Godfrey's 'gotcha', and about as clear a declaration of where its 'stealth editor' stands (whoever that might be), socially-speaking, as you could possibly imagine.
Posted by Craig at 18:45