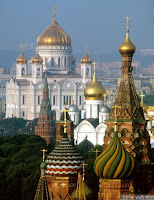 In the spirit of open and honest blogging, I think I'm duty bound to record that this morning's Sunday on Radio 4 was excellent.

Putting my yellow (jaundiced) hat on, however...

...the programme certainly lived up to my caricature of it as being Tablet-fixated on Pope Francis: This edition was a special from Russia whose explicit starting point was the Pope's meeting with President Putin.

And it also allowed me to triumph again at the popular game of Sunday Bingo by having a Muslim representative (this time speaking with a strong meerkat accent) assert (without challenge) that there's no such thing as extreme or radical Islam and that people like Islamic State aren't true Muslims (#it'snothingtodowithIslam, #bingo!).

I am, of course, being somewhat flippant here (as you may perhaps have noticed). Yet, all in all, this was a seriously informative edition of Sunday, and I was impressed by it.

And it was full of Russian Orthodox choral music too (a real favourite of mine).

It was presented by Caroline Wyatt rather than Ed Stourton and (for once) Pope Francis's actions received some proper questioning. (Was Ed listening? Did he faint?)

Caroline was superb throughout.

Did you know that Moscow might possibly have a Muslim population of over one million - four times as many as its Jewish population - but only four mosques (shame!)?

Or that there's a revival of Old Style unison chant in modern Russia (as opposed to all that chordal, polyphonic stuff that we Westerners take to so readily)?

Or that the increasingly anti-Semitic Stalin created an autonomous Jewish region way out east?

From the potted history of the Cathedral of Christ the Saviour (which Stalin dynamited and Yeltsin resurrected) to the interview with Moscow's Chief Rabbi, this was the kind of BBC broadcasting I wholly approve of.

And it would obviously be wrong not to say so.