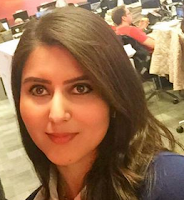 Another small deluge of criticisms included on Newswatch concerned the story of BBC Urdu journalist Ahmen Khawaja and her tweet 'breaking the news' that HM the Queen had died.

She appears to have mistaken a BBC obituary rehearsal for the Queen for the real thing.

She then had to delete her tweet (and several others) and the BBC issued an apology and began an investigation.

Her tweets came after the BBC's head of newsgathering had sent out an email saying:

It’s essential that we can rehearse these sensitive scenarios privately. BBC tours have been suspended, and the blinds from public areas including reception and the media café will remain dropped. I’d also ask for your help in refraining from any external conversations and all social media activity about this exercise. Your continued discretion will be greatly appreciated.

What makes the story somewhat murkier is that Ahmen Khawaja's account of what happened - that she left her phone unattended at home and someone tweeted it as a "silly prank" - differs from the BBC's official explanation:

During a technical rehearsal for an obituary, tweets were mistakenly sent from the account of a BBC journalist saying that a member of the royal family had been taken ill [of course, the offending tweet went somewhat further than "had been taken ill"!]

Someone was being economical with the veracity there, weren't they?

Here's what viewers wrote about it to Newswatch:


The devalues the BBC and its news reports...not acceptable.

The journalist in question should be sacked, if any sense of confidence is to be recovered.

The BBC is supposed to be the most trustworthy news service in the world. Have standards sunk so low?

Now, though everyone involved should have been straight with their explanations of what happened, I can't say that I feel it's anything more than a deeply embarrassing gaffe for the journalist involved - and for the BBC as a whole. Calling for her to be sacked takes things way too far.

Her Twitter feed seems about as unbiased as any I've read through, (Whether her reporting is bias-free, I couldn't begin to say - as my Urdu isn't very good.) She has taken to tweeting quite prolifically recently though, so - like many another BBC journalist! - she may be starting to tweet before she thinks (or checks).

What is it with BBC journalists and Twitter though? Why does it keep blowing up in their faces?
Posted by Craig at 13:43