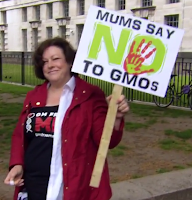 That's a question you've probably never asked yourselves before today. (I know I haven't.)

I ask because quite a few anti-GM activists are spitting feathers over last Monday night's Panorama.

They think it was heavily biased in favour of GM and against the environmentalist organisations that oppose it.

The programme's title was 'GM Food - Cultivating Fear' and, yes, it was green groups like Greenpeace and the Soil Association who were firmly placed in the dock by presenter Tom Heap and accused of stoking up groundless fears about GM.

In a strange inverted mirror image of quite a lot of the BBC's coverage of 'climate denial'...

...the programme (a) presented the case that the scientific consensus overwhelmingly shows GM to be safe, (b) featured a lot of credible-seeming scientists and repentant environmentalists criticising Greenpeace & Co, and (c) carefully positioned the contributions of the two GM 'deniers' (from Greenpeace and the Soil Association) so as to completely undercut their points (especially Greenpeace's chief scientist, who was made to look like a right plonker).

As a supporter of GM, I was far from unhappy with the angle the programme pursued - because I believe the science is settled.

Or for that matter with its debunking of the 'deniers'.

Plus, it was very funny to see the BBC giving exactly the same kind of belittling treatment to environmentalists which they usually give to 'climate sceptics' (like Lord Monckton or James Delingpole) in documentary programmes.

I, therefore, think it was an excellent programme and heartily congratulate Tom Heap for making it (and I'm sure Professor Steve Jones, 'impartial' reviewer of the BBC's science coverage, would agree with me too, which is nice).

However, was it biased?

Or was just the BBC telling it like it is? Keeping it real? (as Rachel Dolezal might say...Respek, Rachel! Big up Yaself, Sista!)

The Soil Association's gripe about BBC bias does show though that the head of the Soil Association, Helen Browning (who to be fair to the SA, did get short shrift on Tom Heap's Panorama) was also invited to appear on Radio 4's Farming Today this week to denounce GM and that Lord Melchett was on Radio 5 doing the same (as it wouldn't do to have Baldrick serving up genetically modified turnips to Lord Blackadder, would it?)

I've no idea what Radio 5 Live was up to, but Farming Today was only balancing up the previous day's episode (one day for, one day against) where a U.S. government advisor stood up for GM and criticised European governments over the issue.

To return to the original question though: Is the BBC biased in favour of genetically modified food?

Well, one episode of Panorama won't prove that, will it? It could, after all, simply be a (John-Ware-on-Lutfur-Rahman-like) BBC one-off.

Searching the increasingly hard-to-search BBC website, is there anything else recently on GM food? Well, here's a screengrab of the latest results: 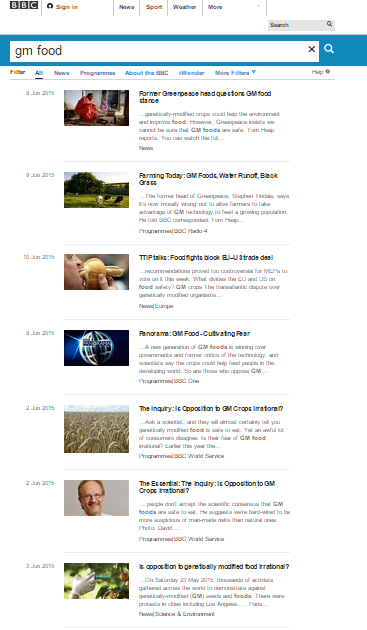 Besides that Panorama, the list includes the pro-GM edition of Farming Today and three separate incarnations of The Inquiry asking 'Is Opposition to GM Crops Irrational?' (quite a telling question, you might possibly think - if you're that way inclined)...

...which, when you read the website write-up, shows a 3 against 1 bias in favour of GM crops (and against opposition to GM).

Two clear examples of bias in the same direction.

Is that proof of BBC bias here? Or will many more examples need to be gathered first?

Given that I'm very happy with the apparent 'direction of travel' of this particular strand of (alleged) BBC bias, why should I bother to pursue it?...

...and why did I even mention it in the first place?

Well, any example of sustained BBC bias is interesting to report - even if it runs counter to your own beliefs and desires....

...if this really is such an example.

I'll leave it there as I seem to be losing my train of thought.
Posted by Craig at 17:35