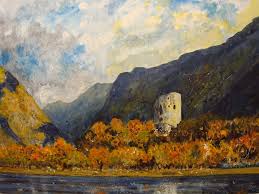 One good thing about BBC Four being stuffed to the gills with repeats is that if you miss something good first time round you're bound to be able to catch up with it a few months later. And then a few months later again. And again.

I'm enjoying Castles: Britain's Fortified History for the first time at the moment (a repeat from last December) - a good, rather old-fashioned history of English Norman and Plantagenet kings and their castles, complete with asides on how to make a sword and the kinds of food a Norman baron would feast on (a mess of potage with spiced wine, for example, and a marzipan-style dessert in the shape of a swan).

The presenter (defying the BBC's editorial guideline which demands that an attractive, posh young woman should be the presenter of every BBC Four history programme) is Sam Willis. And a fine communicator he is too.

I've even learned about a castle I've actually seen but knew nothing about - Dolbadarn Castle in North Wales.

It was build by Llewellyn the Great...also known (for reasons you might be able to work out) as Llewellyn the Last. He came up against Big King Edward I of England.

At one stage the self-proclaimed Prince of Wales ruled 75% of the Welsh people from his puny Welsh castle. Big Ed came along, disposed of Llewellyn the Great and build a whopper of a castle at Caernarvon.

Leanne Wood of Plaid Cymru (remember her?) was shown weeping at the gates of Ed's huge erection for what might have been. [Though I could have made that bit up].

Thereafter, all Princes of Wales have been English, Scottish or German and - like Edward I - have held strong views on British architecture.

I remember going to Llanberis - a lakeside village at the foot of Mt. Snowden - and looking down the lake on a sunny afternoon towards small, ruined Dolbadarn Castle, perched atop a pretty hillock in front of the towering mountains of Llanberis Pass, all capped with dark clouds, and thinking, "That would make a nice photo".... "That is sublime. So Romantic and picturesque. I don't think I've ever seen anything so beautiful".

And now I know what Dolbadarn Castle was for. (Not that it actually worked).

Pointing this out, however, wasn't the real purpose of this post. (Is there a point?)

Yes, the real point of this post - in the true spirit of the internet - was to grouse about something completely trivial...

They hadeul it out for anything serious. Fergal Keane and Clive Myrie emoted to it on their What Britain Wants episodes of Panorama, for example, and, as this was a BBC documentary, Arvo was all over Castles too.

Long-term watchers of the BBC might be aware that the BBC has form here.

In the early Noughties I remember BBC producers appearing on programmes defending their heavy (almost obese) reliance on a particular piece of music by another minimalist composer, Philip Glass. Almost any science programme at the time (or so it seemed), whether on TV or radio, would set its commentary running to the accompaniment of the opening bars of this piece of music...

(Did you recognise it? Were you even aware of it?)

And the connection to BBC bias here is...?

Well, it proves that the BBC is totally biased towards minimalist composers when it comes to providing background music for documentaries.
Posted by Craig at 11:00