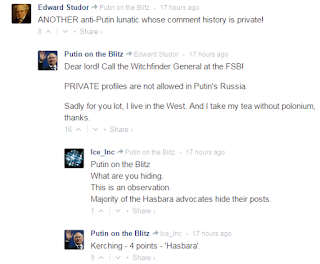 The Sunday Telegraph has a fascinating article about paid pro-Putin trolls:

Ms Savchuk says that for two months, she worked as one of scores of "internet operators" in a secretive “troll factory” called Internet Research, an anonymous four-storey building on a back street in St Petersburg, Russia’s former tsarist capital and Mr Putin’s hometown.

Ms Savchuk’s job was to spend 12 hours a day praising the Kremlin and lambasting its perceived enemies on social networks, blogs and the comment sections of online media.

And the curious thing is that below that very article is a comments thread where those very KremTrolls are out in force - and getting absolutely skewered.

It has to be said that the Telegraph - and many other sites - have been absolutely infested with KremTrolls for a good couple of years now. It took me a while to realise it though. I just thought that lots of people admired Putin and thought his foreign policy was super and believe that Russia Today is a bastion of free speech.

State-sponsored trolling, eh? Whatever next!

I'll have to listen out to hear if any of them are calling Any Answers. If an "Alexander Windsor" comes on sounding like a delightful TV meerkat and blaming Mossad, then I'm shouting "Bingo!"
Posted by Craig at 10:07