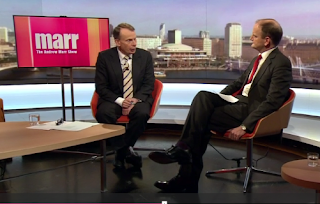 Andrew Marr's interview with UKIP's Douglas Carswell today was entirely dominated by questions about the structure of/infighting within the 'Leave' campaign(s), plus the personalities involved in that campaign.

So much so that Mr Carswell didn't actually get any time to spell out his arguments in favour of leaving the European Union.

This made me realise that any attempts to monitor BBC impartiality in the run-up to the EU referendum simply by counting and comparing the numbers of pro-Leave and pro-Remain interviewees on a given programme over a particular period of time...

... could well be a fruitless exercise.

Now that might be supposed to have balanced things out somewhat...

...except that both of the interviews with the pro-Leave politicians (Kate Hoey and Steve Baker) were - like Andrew Marr's interview today with Douglas Carswell - almost exclusively dominated by the same kind of questions: questions about the structure of/infighting between the 'Leave' campaign(s), plus the personalities involved in the campaign. (Kate Hoey's was entirely dominated by such questions, thanks to James O'Brien).

Again, neither Mr Baker nor Ms Hoey had time to spell out their arguments in favour of leaving the European Union...

...in marked contrast to the pro-Europeans (Alan Johnson, Ken Clarke, Carl Bildt et al) interviewed last month, all of whom got plenty of chance to speak up for the UK's membership of the EU.

It's to be hoped this trend doesn't continue.
Posted by Craig at 19:29