"OK, your point's well made" 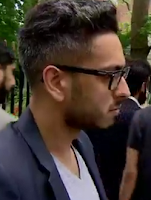 David Cameron's speech in Slovakia, where he said that some British Muslims quietly condone the beliefs of Islamic State, has drawn a range of widely differing responses from Muslim groups, counter-terrorism experts, politicians and others - some for, some against.

Last night's Newsnight, however, choice only critics of the speech.

First came a report from Secunder Kermani which juxtaposed clips from the PM's speech with reactions from the Muslim community": The first Muslim vox pop described it as "a mini attack on the Muslim community; the second said that Muslims on social media are already "destroying" ISIS propaganda; the third said that mosques are doing enough and can't be blamed; the fourth said that Islam and Sharia are "set in stone" and will never change for anyone, and that "some individuals...misunderstand it"; the fifth said it's the responsibility of all of us ("As a British citizen I think we are all responsible for this"). Not one of them accepted any of David Cameron's points.

Then came an interview with Sir David Omand, former director of GCHQ, who also disagrees with Mr Cameron over this (as Newsnight was probably well aware when they invited him to appear on the programme).

Here's a flavour of Sir David's interview with Evan Davis:

Evan Davis: As I listen to you, it sounds like you're taking a very different perspective. You're really the opposite of the Prime Minister because you're really saying, 'Hang on a minute. If we alienate some of these communities, who may have views that are not really mainstream British values at all. If you alienate them by going after them, saying "Your views are unacceptable. You're a gateway to violent jihad" then you're gonna sort of lose touch with the people who may be able to influence that violent jihad'.

Sir David Omand: The community as whole does not, I believe, share those views but there are some who do, and it's very important in tackling the few who do hold those views that you don't demonise those whose support we actually need.

And did Evan Davis then challenge him and put the other side of the argument (David Cameron's side)? Well, this was the next question:

Evan Davis: But is there a case that you might harden attitudes in certain communities. The more you draw into the kind of label of "unacceptable" you've got a new bunch of people who think, 'Oooh, the government's attacking Muslims'; you've got people saying, 'This is not where we want to be'; you divide communities and harden attitudes?

Despite its opening "but" that question merely continued and amplified the point that Evan and Sir David had already been making, critical of the PM's case.

Sir David made a reply saying that caution and subtlety are needed and Evan replied by saying, "OK, your point's well made."

Strangely no one at Newsnight seems to have seen any problem, impartiality-wise, with featuring no one but people who disagree with David Cameron's speech.

And Evan Davis didn't seem to see any problem either, given that he merely drew out and reinforced (amplified, you might say) those very criticisms of the prime minister.

Unsatisfactory and biased BBC reporting.
Posted by Craig at 14:47