We’re havin’ a heatwave.  I’m alone at the helm of the good ship “Is the BBC Biased?” while Craig is on holiday so postings might be few and far between for the next few days, and less diverse than those to which you’ve become accustomed.

As I write I’m defrosting the freezer because someone left the door ajar all night and the drawers have iced up and won’t budge. 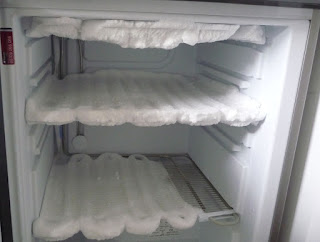 I haven’t listened to much radio or TV apart from a small segment of the Today programme, (Giles Fraser was on TFTD again) and a tiny bit of last night’s Newsnight, which was about Greece. Evan Davis looked gaunt and cadaverous and Emily Maitlis looked tired and weary. Nothing new to say about it.

I think the BBC’s unpopularity has reached a new low. Both the audience and the BBC staffers seem to have lost their enthusiasm. Maybe it’s the heatwave, maybe it’s the stress of the imminent charter renewal and funding issues, maybe it’s just because there’s no new talent and all the old talent, whomever or whatever that was, has moved on or died.

There’s no heavyweight politics - the nearest is Andrew Neil’s politics show, but that’s a bit curate’s egg, what with his erratic choices of whom to savage and whom to suck up to.

The comedy is stale and repetitive or entirely dependent on shock, or someone’s idea of being offensive, (as long as it’s not offensive to Muslims.)  The drama is formulaic and safe and the reality shows are unreal, set up, contrived or faked.

The Scandi serials on BBC4 are refreshing - that’s partly because of the unfamiliarity of the scenery and of the actors, but even they seem interchangeable and ubiquitous  once you get used to them. The current series from Belgium, Cordon, is weird. It’s full of scenes where you can only wonder what the hell is supposed to be going on. Why, for example was there only one room  with one bed in it at the National Institute for infectious diseases?  Actually I don’t even want to go there. (a....tisshhoo!)

Everything that threatens to get serious is hobbled by political correctness. Here is something by Douglas Murray you’ll have read already:

“The night after the Charlie Hebdo atrocities I was pre-recording a Radio 4 programme. My fellow discussant was a very nice Muslim man who works to ‘de-radicalise’ extremists. We agreed on nearly everything. But at some point he said that one reason Muslims shouldn’t react to such cartoons is that Mohammed never objected to critics.

I cannot imagine another religious discussion where this would happen, but it is perfectly normal when discussing Islam. On that occasion I chose one case, but I could have chosen many others, such as the hundreds of Jews Mohammed beheaded with his own hand. Again, that’s in the mainstream Islamic sources. I haven’t made it up. It used to be a problem for Muslims to rationalise, but now there are people trying to imitate such behaviour in our societies it has become a problem for all of us, and I don’t see why people in the free world should have to lie about what we read in historical texts.

I always notice the rolling updates on our sidebar. Nine times out of ten the BBC’s are lightweight and trivial, or celebrity or sports related, while all the others tend to feature news and topical issues. I don’t know why this is. I suppose it’s to do with our old friends Dave and Sue. They’re politically correct, left-leaning and a bit thick.
Posted by sue at 16:39