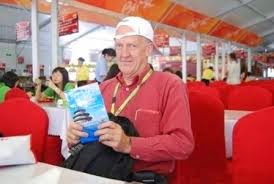 Veteran BBC reporter Hugh Sykes (he's been with them for over 40 years), engaging on Twitter with Biased BBC's DB back in 2013, said

I am scrupulously objective when reporting - unlike some of my Tweets! I obey: "Hang up your opinions with your coat"

In other words, yes, maybe he's a bit dodgy, impartiality-wise, on Twitter but when broadcasting on Radio 4 he strives for (and achieves?) true BBC objectivity.

Thus, his repeated Twitter digs at, say, UKIP and Tory immigration policy are something you won't (however hard you try) hear reflected in his broadcast reports.

Hugh's latest BBC report (broadcast on Radio 4 today) focuses on Hungary's right and far-right, plus its hard-done-by gypsies. Does it bear out his distinction between the way a BBC reporter may behave on informal social media and on 'the BBC proper'?

His report features an "independent" Hungarian think tanker making a glancing allusion to Britain in the competitive 'right-wingery' between Hungary's "conservative" Fidesz and "far-right" Jobbik over such things as immigration. [The inverted commas there are to signal direct speech, not to dispute that Fidesz is conservative and Jobbik far-right].

Alert Radio 4 listeners may well have picked up on this.

Hugh Sykes, however, leaping straight onto Twitter, then massively amplified the man's glancing point, making it one of his two self-chosen 'talking points' whilst advertising his own report:

On Twitter, however, Hugh Sykes, was braver. He did spell it out:

The thought processes going on in Hugh's head are plain for all to see on Twitter, aren't they?

We are asked to believe that Hugh's views on Twitter in no way manifest themselves in Hugh's BBC reporting - even though his reports almost invariably, somehow, seem to precisely mirror the world as Hugh sees it on Twitter...

A strange symmetry indeed.
Posted by Craig at 20:34