I was struck by the absence of Stephen Sizer on the Sunday programme.

His 9/11 remark made the mainstream news, after all.
This article, about the church ‘investigating’ Sizer’s link to an article entitled  "9/11 Israel did it", and asking sweetly whether that was antisemitic, and the other article about Sizer’s ‘apology’ and statement:
" I never believed Israel or any other country was complicit in the terrorist atrocity of 9/11" were reported on the BBC website on consecutive days. It was also mentioned in some BBC news bulletins.

In the spirit of (the difficulties of) trying to prove a negative. “I would welcome articles you can recommend refuting the allegations” (Show me evidence that the Jews didn’t do it”)  I would like to see the evidence that the BBC was justified in omitting topical news (deemed newsworthy even by the BBC) concerning one of the church’s most reprehensible antisemites, from the BBC’s foremost religious radio programme. 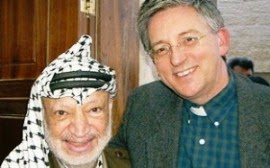 Sizer has been peddling his toxic views for ages, but until recently it was only bloggers like Daphne Anson, Cif Watch and Harry’s Place who found his antisemitic antics of interest.
It’s pretty amazing that he can wage his war against the Jews so openly, in the name of the church, with impunity. 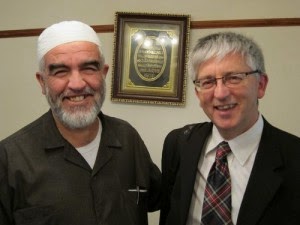 Now he’s surpassed himself. In the full glare of the current media stormette, he’s jaunted off to Tehran to mingle with the vile and infamous. He has gone, so he says, as an ‘ambassador.’
You’d think the BBC ‘s foremost religious programme might have picked that up, wouldn’t you?