Antisemitic incidents on the rise

Pro Palestinians often protest that the Arabs are being made to suffer for wrongs done, not by them, but by the Nazis. No doubt the original ‘suffering’ was the insult of having Jews as next door neighbours.
Lyn Julius writes about the Middle East’s forgotten Jewish refugees from Arab and Muslim countries.  If anyone ever tries to tell you that the Palestinians are paying the price  for the crimes of others, they’re mistaken. Hitler and the Arabs worked closely. They were buddies. Maybe not a lot of people know that.

“  "Anti-Semitic reactions to the conflict in Israel and Gaza" were the biggest factor behind the rise, the trust said.”
From the BBC’s report of the CST’s findings: “antisemitic incidents 2014”.

The BBC, as is its wont, illustrates its article with a picture of two eccentric-looking orthodox Jewish students (they look like students) apparently causing mild amusement to a couple of passing police officers. 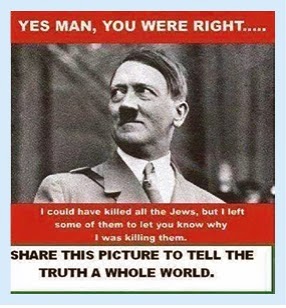 If the media took as much trouble to cover, or dispatch as many reporters, or highlight the personalities of individuals affected by any of the world’s other conflicts in the same manner and with the same intensity as they cover matters concerning Israel, surely fewer ordinary (non Muslim) British people would be swept away in the downdraught.

Many other wars and conflicts have resulted in equal (and more) death and destruction, and it’s not the only time the media has turned a blind eye to the transgressions of one side alone, but the Israel / Palestinian conflict is given extra special treatment. The Goebbels treatment.

By bombarding British viewers with such biased one-sided reporting it’s as if the BBC and much of the MSM have given the green light to the Muslim community to freely express its hatred of Jews and Israel, encouraged and egged on by the liberal left.  What else did the BBC expect?

I notice they’ve given prominence to a translation from Arabic, of a sort of ISIL manifesto aimed at female Jihadi recruitment. It’s the first time they seem to have realised that Arabic is translatable.

What about the translations from thousands of Arabic language videos  of the outrageous vilification of Jews and Israel that is rife throughout the Arab world?
Not interested, apparently. They should be, though, It’s all there for those who care to look, and perhaps not a lot of people know that.

Last year saw a record number of anti-Semitic hate incidents in the UK, according to figures released by the Community Security Trust, a charity which provides security for synagogues, Jewish schools, buildings and community events. We speak to reporter Sanchia Berg and Rabbi Arnold Saunders, Rabbi of Higher Crumpsall and High Broughton Synagogue in Salford.

This morning on the Today programme Rabbi Saunders from Salford told Mishal Husain that the best way of dealing with antisemitic incidents is to ‘ignore them’. We must assume he was applying that philosophy to the individual rather than the government.
Although he recounted some unpleasant incidents, he stressed that Britain was a ‘good place for Jews to live.’  He may not have wished to appear alarmist, or he may simply be deluded.