Sarah, the Champion of the World 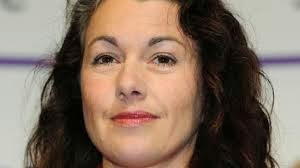 It's been such a busy week this week that it's been hard to keep up with the news, or to do much blogging - and (apologies in advance) it's only going to get worse over the next couple of weeks.

However, I have been reading a lot of negative stuff (in the usual places) about the BBC's coverage of the latest damning report on the Rotherham abuse scandal, and the subsequent fall of the ruling Labour group there.

A surprising amount of that negative comment has focused on one figure - the newish Labour MP Sarah Champion (the one who found it amusing that Nigel Farage has been blockaded into UKIP's branch office there (by what looked from their banners like the usual crowd of left-wing activists). The BBC has been accused of giving her a soft time and not holding her and her party responsible.

The one exception was Andrew Neil, who was credited with giving her a hard time - as indeed he did, mentioning the word 'Labour' countless times in the process.

I've not seen or heard enough to judge the other Sarah Champion interviewers, but I did see the programme which many a BBC-bashing commenter found especially biased - the first installment of Michael Cockerell's fascinating new series Inside the Commons.

What annoyed them about it was that Miss Champion had been made the star of the show and been shown in a very good light, championing the victims of the Rochester 'grooming' gangs.

Now, I watched that programme before seeing the criticisms of it, and loved it. And it did feature a second newish MP, the Conservative Charlotte Leslie.

However, I did come away from it rather smitten with Sarah Champion. She came across as personally charming, deeply committed and unaffected by the trappings of power. She was shown to be a politically-successful parliamentary newcomer, winning a very rare opposition backbench victory related to helping the victims of child abuse.

And if I felt so positively towards her then I bet a lot of other people did too.

Charlotte Leslie's only victory, in contrast, was in getting to ask a somewhat toadying question to David Cameron at PMQs - a personal victory which followed shortly after a section of the programme where such toadying questions had been held up to ridicule.

Or that might just be how things worked out.

If Sarah and Charlotte had been followed from the start (as appears to have been the case) and Sarah got her cause incorporated in a government bill while Charlotte merely got to ask a toadying question at PMQs, then that's what happened and how could the programme report otherwise?
Posted by Craig at 21:57

Labels: 'Inside the Commons', Michael Cockerell