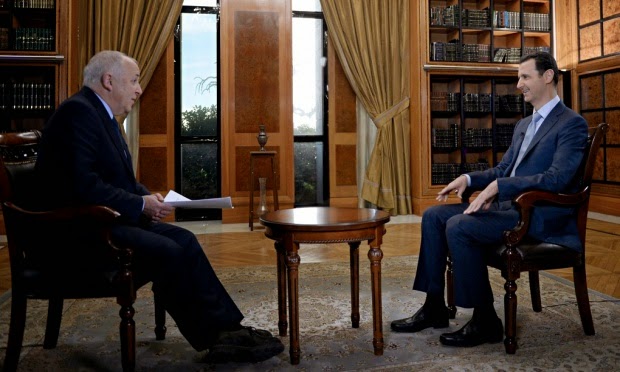 “Jeremy Bowen, the BBC’s Middle East editor, suggested that the fact that Mr Assad was prepared to give him an interview indicated that the dictator is feeling as secure as at any time since the war started. "

Is that necessarily true? That giving the BBC an interview means Assad feels secure?

"Above all, his durability has exposed the incoherence of Western foreign policy towards the Middle East, which on almost every occasion – from the invasion of Iraq to the enthusiastic support of the so-called Arab Spring – has been naive at best and calamitous at worst.”

Amen to that. Following the Arab Spring, one can’t help thinking wistfully that we should have listened more carefully to this wise  ‘either or’ type advice:  “It’s  us..... or chaos.” How true. Maybe we should have stuck with ‘us’ but that’s not for me to say.

I looked at the Guardian, a paper which is more likely to see things through the eyes of the BBC’s Middle East editor, rather than (myself) a person who might see it as a comical, rather unhelpful two-handed contest to determine which of the two lisping combatants is the most unattractive.

The Guardian begins with a statement that I agree with. “(the interview) may not have broken new ground...”
That’s what I was thinking. Never mind, that wasn’t going to get in the way of the BBC’s relentless promotion, which tacitly promised some sort of revelation.
All day we were treated to excerpts, trails, interviews with Bowen and pointers to the times it was to be shown in full, on the BBC.

The picture of two smartly dressed men sitting opposite one another, Bowen to the left, Bashar to the right was a familiar one. Where have we seen that image before? Oh yes, here. 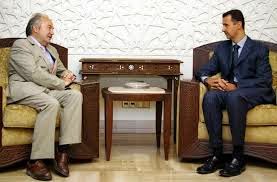 Now I come to think of it, Bowen is nearly as gorgeous as George. They have similarly spherical, shiny heads as well as an uncanny fondness for being snapped in the company of tyrants and despots.

Throughout the interview I couldn’t help wondering who Bowen dislikes and distrusts most, al-Assad, or Israel’s PM. It would be a close call. Anyway, Bowen’s questioning seemed banal and unlikely to get anywhere. He kept mentioning the use of barrel bombs against civilians, which are, apparently, more indiscriminate than ordinary bombs.

In the light of all that, who’s to say if the barrel bomb issue is plain immoral, simply an unadulterated war crime? It certainly seems so; the Telegraph seems to think so, and there’s this, too . All seems watertight but, who knows, does ‘barrel bombs against civilians (deliberate)’ need more probing before being accepted as irrefutable fact?

We like to think of al-Assad as ‘Basher’, like some character from the Beano, because of the violence he oversees. It's doubly creepy because of the lisping and whispering, and that clinical aura of medical-like precision. He used to be an ophthalmologist, and a doctor.   Just imagine getting bad news from Dr. al-Assad.  Basher is a thug in effete disguise and all the more sinister for that.

Anyway, Basher is denying the barrel bombs, and making jokes about cooking pots, and Jeremy is making disbelieving faces and reminding me of a lizard, his little tongue darting out as he asks yet another hopeless question destined to elicit precisely nothing new.


War sucks, says Basher, which is the truest thing either of them said sitting opposite each other in that ghastly empty, glittering palace.