Where the BBC fears to tread 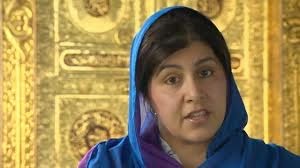 The Telegraph may be a shadow of its former self these days, but at least it's still got Andrew Gilligan.

Entryism, the favourite tactic of the 1980s’ Militant Tendency, is when a political party or institution is infiltrated by groups with a radically different agenda. Since Militant’s Trotskyites were expelled from the Labour Party, the word has rather fallen out of fashion.

But now, according to one Muslim leader, Islamic radicals are practising entryism of their own — into the heart of Whitehall – courtesy of a woman who was until recently a government minister.

Baroness Warsi, the first Muslim woman to sit in Cabinet, handed official posts to people linked to Islamist groups, including a man involved in an “unpleasant and bullying” campaign to win planning permission for the controversial London “megamosque” proposed by a fundamentalist Islamic sect.

He sits – alongside other radicals or former radicals and their allies – on a “cross-Government working group on anti-Muslim hatred” set up by Lady Warsi and Nick Clegg, the Deputy Prime Minister.

Some members of the group are using their seats at the table to urge that Whitehall work with Islamist and extremist-linked bodies, including one described by the Prime Minister as a “political front for the Muslim Brotherhood”. Some are also pressing to lift bans on foreign hate preachers from entering Britain, including Zakir Naik, who has stated that “every Muslim should be a terrorist”.

Can you imagine the BBC breaking a story like that? Can you even imagine the BBC picking up on this scoop and running with it - despite it being, if true, a very serious story?

The main source for AG's story, intriguingly, is Fiyaz Mughal, a former member of the working group - intriguing because the Tell Mama man has previously been on the receiving end of Andrew Gilligan's investigative journalism.
Posted by Craig at 10:39