Rother(h)am MPs and the BBC

I've continued to enjoy Michael Cockerell's marvellous documentary series about the House of Commons, Inside the Commons. It's informative, brilliantly filmed, and highly entertaining.

Entertaining as I find Jacob R-M, I can well imagine that 'ordinary' voters might find him a bit too much of a 'nice-but-dim' 'Tory toff' - especially as he was presented here. And Peter Bone (who I also like) might have been hampered by Michael Cockerell's commentary, presenting him as a "joker". Poor Jenny came across as deeply lovable but utterly useless.

The clear star of the show, however, was Steve 'not the member for Rotherham' Rotheram. 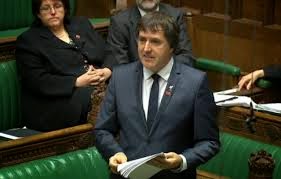 Like the actually member for Rotherham, Sarah Champion [in the first episode of the series], Steve was first show as charming chappie (a lovable scally), then as an earnest campaigner for the public [campaigning on the issue of the danger of old tyres on vehicles].

And, like her, he won out, in getting his campaign enshrined in a bill. [A successful MP!!!!] A female member of the public, personally affected by the issue, wept in gratitude on his shoulder. [I put that cynically, on reflection, but it was hard at the time not to be touched by her depth of feeling].

As for the real Labour MP for Rotherham, here's a video - and many thanks to a reader for sending this to us - of Sarah, the Champion of the World, bare-armed, sucking up to a certain, pious demographic segment of her constituency (can you guess which?) at the time of Operation Protective Edge:

Labels: 'Inside the Commons'