I missed the first part of Monday night’s Newsnight. I switched it on just as Evan was interviewing Dore Gold who was speaking on a screen from Jerusalem. 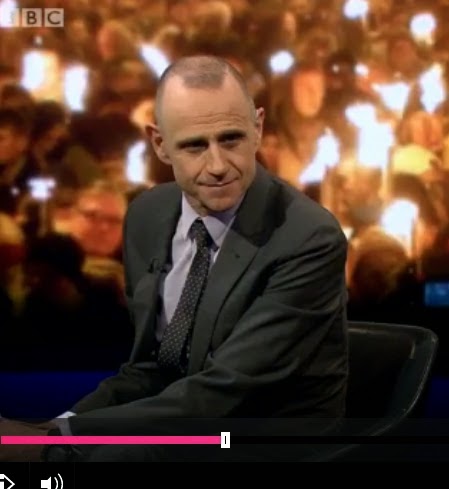 Evan has trouble pronouncing “Benjamin’ and ‘Netanyahu” but he stumbled through with a rough approximation  - ‘bin man’ - to ask whether Dore Gold agreed that it was impolite of Israel’s prime minister Benjamin Netanyahu to tell Jews they should get out of Europe “at the first sight of these attacks”.

Not that that was what the Israeli PM actually said, but no matter, it’s what the BBC wanted to think he said. In fact I’ll transcribe Netanyahu’s words, as read out by Evan :

“..This wave of terror attacks can be expected to continue including antisemitic and murderous attacks and we say to the Jews, to our brothers and sisters, Israel is your home and that of every Jew, Israel is waiting for you with open arms.”

Evan continued with his intro, turning to David Cesarani who was sitting beside him in the studio:

“So is this the time for European Jews to leave? David Cesarani, your reaction to the plea from Binman Netanyahu for Europe’s Jews to get to Israel?”

Cesarani said that although most Jews have an affinity with Israel, the Jews have created vibrant communities in European counties, and we’ve heard expressions of solidarity from the Danish PM.......
....... Europeans have a greater consciousness of what antisemitism can lead to..... we’re all in this together..... We’re all targets for Jihadis who hate democracy, pluralism and the cosmopolitan societies we enjoy....shoulder to shoulder... not especially a rise in antisemitism...

Evan, turning to the screen:

“Dore Gold, the word solidarity was the one that was missing from PM Netanyahu’s plea and it just seems a bit... impolite, almost,  to call everybody to come home and leave Europe at the first sight of these attacks, no?”

(It might have been Evan’s first sight, but of course it wasn’t the first sight.)

Dore Gold replied to the effect that Netanyahu was reminding Jews of the original purpose of Israel. A haven for Jews. “No-one says they should now pack and leave Europe.” But Israel is there for you. A sanctuary. Israel was created as a haven for Jews at their time of need.....

But you have extremist groups in Israel, Lahava for example, who protested last year, very unpleasantly, at a wedding of a woman of Jewish descent who was marrying an Arab man, campaigning against such marriages, making a big noise about it - it wouldn’t be very nice  if a European government said to that woman, come to Europe, we’re much more tolerant and multiculturalism (sic) than in Israel. Come over here, get the hell out of Israel, we’ll give you a home... would you feel that was, sort of, in the spirit of good neighbourly relations.?”

Dore Gold:
“Well, first of all you picked a real extreme group on the edge of society that isn’t respected by the mainstream...”

“well, nor are the antisemitic here!”

(Well, since Evan is part of the mainstream, and this line of questioning is bordering on antisemitic, I’d say he’s a bit wrong.)

Dore Gold:
“We’re not saying that Europe is bad, that the evil wind that is blowing over Europe is the same as what happened seventy years ago.....Israel is a sanctuary; it was created to provide sanctuary.

Professor David Cesarani, whose nose has already started to make aliyah, says we don’t need PM Netanyahu to remind us what a great country Israel is. If Israel wants to welcome Jews into its arms it should do so because they want to do so, not because they’re taking flight. Dore Gold is saying danger is knocking at the door. He’s creating  a sense of panic, he’s inciting emigration out of fear. I’m terribly sorry to hear Mr. Netanyahu playing the politics of fear to his domestic electorate and to Jewish people in Britain, France Denmark... “It’s as if he needs to make Israelis feel they’re surrounded by enemies and also the Jewish people outside.”

(Does Netanyahu really need to make Israelis or European Jews feel they’re surrounded by enemies? They must have already noticed.)

Dore Gold says he hopes every Jew is safe wherever they live, but should they feel the need Israel is there for them. “They are welcome to come home.”

David Cesarani, as someone who lives in Europe, who lives in Britain, how different is the climate now from ten years ago. Is there more antisemitism? We see these reports that it has grown enormously, not just - more, perhaps in France than this one?

Cesarani said:  What happened to Dan Uzan is obviously horrific and terrifying but Jews in Britain and Europe have faced these kind of threats before. Terrorism from the PLO, from Black September, shootings attempted assassinations have happened here in Britain, but we have worked with the police and the security forces and we have remained and continued to create a vibrant society, a Jewish society in which we feel for the most part secure.

“There are may things going on that tend to be aggregated together under the term antisemitism. A hostility to Israel, annoyance at settlements, there are stupid comments made about Jews chasing money - from football managers and football club owners for example, these are always going to be around. What’s given an edge to the current situation is these shootings. That is terrifying. But we have to put our faith in the police, intelligence and security forces and stand with our fellow citizens against it.”

There. I apologise for saying the nasty thing about the nose. I was exasperated because David Cesarani seemed to be doing what a lot of the BBC’s pet Jewish spokespersons do.
They aid the BBC’s case against the Jews. I’ll be generous and say they do it inadvertently.

In this instance I think the BBC is doing something outwith its remit. It’s not alone, but unlike the newspapers that are out looking for a fight, the BBC isn’t supposed to be taking sides. It seems to me that this spat over what Netanyahu did or didn’t mean is largely manufactured. Why argue on the head of a pin over a something-and-nothing issue?

Cesarani is being gratuitously complacent. He hasn’t mentioned the Muslims, a factor that differentiates the antisemitism he alleges ‘we’re used to’ from the new, Islam inspired antisemitism. Perhaps he hasn’t noticed it.
It amused me when he mentioned ‘stupid comments about Jews making money’ and hastily attributed it to football managers, when anyone who’s been keeping an eye on the news knows that was one of the gaffes that Tim Willcox made.

It all seems like gossip and tittle-tattle. We bandy about the term antisemitism. Never mind the EU definition, the Oxford Dictionary definition, the LGBT or the RSPCA definition of antisemitism.
It can mean so many things, from the trivial to the terminal. But why should we accept any of it?

It’s hugely exacerbated by the media’s antisemitic slant in its portrayal of Israel. Perhaps the audience is already receptive. Perhaps they’re eager to go along with it.

The media is always ready to pounce on the slightest gaffe or misspeak and make a bloody great issue out of it, like gossips in a village pub with nothing better to do.  Someone says something vaguely dodgy, and the 24 rolling news draws it out and makes it last for weeks.

That’s bad enough. Worse is the BBC’s mission to play down Islam-fuelled antisemitism. The media wants to blame it on Israel’s conduct. Israel’s ‘conduct’ is distorted and misrepresented by the media.The media ignores the antisemitic incitement that’s rife throughout the Arab world.

The media is complicit in fuelling antisemitism. The answer is not more armed guards outside Jewish institutions. The answer is for the media to start telling the truth.