Speak for your Self 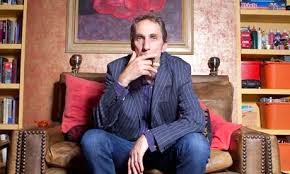 Will Self is a mock-profound peacock. Every obscure word flaunted is an eye on his fantastical, extravagant tail.

Despite that, BBC Radio 4 intended to set him up as their “writer in residence” - before someone got cold feet. (A shy BBC peahen perhaps).

In some ways it's a shame the channel didn't have the courage of its convictions. Will Self is the embodiment of so much of the underlying spirit of BBC Radio 4 that he would have represented its 'official point of view' splendidly.

His latest 'A Point of View', reacting to the attack on Charlie Hebdo, accorded perfectly with this past week's series of Letters from Europe  - Radio 4's specially-commissioned series reacting to those attacks (see various recent posts). A snugger, more slipper-like fit between the one and the other could scarcely be imagined.

Will en utilisant des phrases françaises obscure de montrer son plumage extravagant...but, despite that, the thrust of his argument was crystal clear to any English speaker.

He argued that French secularism is built on quicksand, that it's "a form of imperialism".

And as for Charlie Hebdo and its "seeming satire", well, he most definitely is not Charlie.

He thinks Charlie Hebdo published the wrong sort of satire - the kind that "afflicts the already afflicted" [guess who?] and that's "merely offensive or egregiously offensive". It's not "constructive". It doesn't want to make society "more equal, more fair, more just". [Doesn't it, Will? Weren't the murdered cartoonists left-wingers like you, who were into such things?]

Nasty, nasty Charlie Hebdo, forcing poor Will Pecksniff and Radio 4 to have to "re-think" their long-held positions on satire...in order to make them fully conform to their core beliefs - and not offend they-who-must-not-be-offended, or satirise those they think shouldn't be satirised.

P.S. In scanning Google Images for an apt image of Will for this post, it becomes as plain as a pike on a pecksniff that Will loves posing for photos. No multinational is as image aware as Will Self. So much so that he should be re-named 'Will Selfie'.
Posted by Craig at 22:29

Labels: 'A Point of View', Charlie Hebdo, Will Self