A fab way to mong out on the sofa 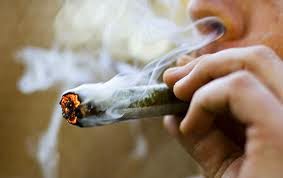 In our olden blogging days at the Biased BBC blog Sue and myself would regularly find ourselves laughing at Martin's repeated (and endlessly inventive) digs at "coke-snorting Beeboids"(those strange, exotic and very biased creatures who spend most of their lives on Hampstead Heath - and employ massed ranks of Romanian rent boys).

Though no one seems to mention it much these days, there used to be a  widespread perception on that blog that the BBC was determinedly pro-drugs - a criticism that the Mail's Peter Hitchens still regularly advances against the corporation.

One of my Ozymandias-like projects a few short years back was to write up my close, long-term study of BBC Home Editor Mark Easton's blogposts on the issue of drugs.

Alas, that project remains a colossal wreck, around whose decay, boundless and bare, the lone and level sands stretch far away.

If I've a spare few weeks (unlikely) I might still dig its vast and trunkless legs of stone from the desert, but it's a vast task (so doubly unlikely) and, so, you are going to have to trust me when I promise you that it would show a massive pro-drugs liberalisation bias from the BBC man, and that it's one of the clearest cases of bias I've ever come across. (I really should do it).

Thus, I remain sympathetic to criticisms of the BBC as being biased on the matter of drugs - even though my own position is thoroughly libertarian on the issue, and thus in tune with that alleged bias. (I'd decriminalise the whole lot.)

I mention all this because I read someone making Martin's old point about the BBC being pro-cannabis (among other drugs) this very evening and thought I might just do another BBC search, using the term 'Cannabis', to see what turned up.

Doing so I found one pinned article - the Editor's Choice for 'Cannabis'...

...and it's a piece whose Editor's Choice blurb asserts its own impartiality:

Drink & Drugs: Cannabis
Impartial advice about cannabis - what is it, how does it make you feel and what are the health implications of using it?

Some nice, Matisse-like bright green leaves decorate the page, illustrating the drug. But, yes, we get some warnings that cannabis has certain health risks, like tobacco, that are "not nice" and that if you've got existing mental health issues you shouldn't take it - though these are balanced by its positive medical uses in treating chronic pain and multiple sclerosis. And, yes, we get told that some people suffer anxiety as a result of it, but...

...after a very matter-of-fact, normalising introduction, the article (written for a Radio 1 audience) tells us:

Dope will make you chill out and smile a lot. You might get the giggles and feel really hungry. All of your senses will be heightened. Food tastes delicious and music sounds really fab. You might lose track of time, and find yourself monging out on the sofa for a few hours.

Frankly, it sounds lovely, doesn't it, man? Mmmmm, delicious-tasting food and fab music and monging out on the sofa! What's not to like?

Altogether now....Iiiiiiii'm waitin' for my man...

Immediate update: That said, just as I'm about to publish this post, what pops up as the second story on the home page of the BBC News website?

Yep, a piece about the down sides of cannabis (albeit "potent" cannabis)!