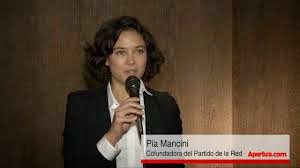 I thought I'd keep an eye on them after a commenter at Biased BBC gave the opening report from an Argentinian activist from Democracy OS a thoroughgoing raspberry, describing it as communist "rambling".

Whether the group, DemocracyOS, really are communists is something I've not been able to determine for myself, but they do seem to have grown out of the #Occupy movement, which suggests they are left-wing. Thus, if you think that Newsnight under former Guardian deputy editor Ian Katz has a left-wing bias, then these are probably the kind of people you'd expect such the programme to grant a platform to.

Judging a BBC series on the strength of just one report is risky though. The BBC promises to balance such things out over the course of this kind of series, so the following three days might well have featured a balancing range of voices (from right across the political spectrum - from far-left to radical-right.)

Well, Tuesday's edition had a report from the presenter of BBC Three's Free Speech [the programme that refused to broadcast a report on what it's like to be a gay Muslim in Britain because the mosque where the programme was being filmed didn't like the idea]. Rick Edwards cited the #Occupy movement and used some polling charts showing the Conservatives, Labour, the Lib Dems and the Greens, but not UKIP. He then showed an example of someone voting for one of those parties. Guess which one they voted for? The Greens. He wants the voting age lowered and compulsory voting.

On Wednesday it was the Guardian's left-leaning Ben Goldacre deploring the lack of evidence-based policy making and the misuse of statistics by politicians.  It was a very interesting piece and I agree with him entirely, but it was politically-tilted. He had a go at Iain Duncan Smith over his use of stats regarding benefits reform.

The final report came from another left-leaning figure, classicist Mary Beard. She was arguing about politicians' lack of rhetorical clout and use of tired, tedious cliches. Bias-wise, she trod a balanced bath and, as with Ben G, I agreed with her main point (and enjoyed her piece). She then debated it with another left-leaning figure, Labour speechwriter Philip Collins.

From this you can see that, however interesting the reports in question, none of them gave viewers a right-wing perspective. No one at Newsnight seemed to think about doing so. It was as if democracy could only be 'rewired' by the Left in Newsnight's eyes.
Posted by Craig at 21:56