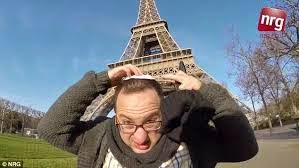 You may have heard about Israeli journalist Zvika Klein and his very short video about walking through in Paris wearing a kippah and being repeatedly spat at and abused, thus revealing the depth of Jew-hatred in parts (but only parts) of Paris - namely predominantly Muslim neighbourhoods.

You may also have heard about Mr Klein's experience with a Channel 4 News interviewer who asked him if the video was "an act of provocation" (and repeatedly made the usual 'Don't Muslims have it as bad?' point as well) - which tells you all you need to know about where Channel 4 News stands these days.

BBC Watch, doing its duty, notes BBC Trending's take on the video. Hadar highlights the differences between how the BBC reported this video (pouring a good deal of scepticism over it) and how they reported the video which inspired it, allegedly showing sexism in the U.S.A. (where no scepticism whatsoever was poured over it).

Now, I can see that some of the caveats about the way Zvika Klein's video was edited (as reported by the BBC) are probably valid, and it's to be hoped that Zvika will now make a much longer video showing his experience in the round of 'walking around Paris for 10 hours as a Jew' (which would be very interesting), but...

...BBC Watch is correct to point out the contrast in treatment, and to note that the BBC toned down the sheer viciousness of the anti-Semitic abuse.

The point that stood out for me though is this quote from the BBC Trending article:

“With an apparently anti-Semitic murder among two killings in Copenhagen this weekend, and last month’s Paris attacks including four murders at a Kosher supermarket, some Jews in Europe are feeling vulnerable.”

That seems to me to be an example of BBC over-cautiousness (in the interests of 'community cohesion') at its worst. I'd say there's nothing "apparently" about the anti-Semitic nature of the attack on the synagogue in Copenhagen by a Jew-hating Muslim fanatic.
Posted by Craig at 16:06