The Tablet on Sunday 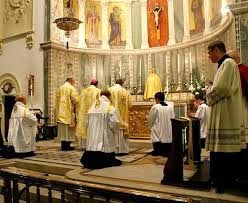 Having formerly been the BBC beacon for incessant Benedict-bashing, Radio 4's Sunday effortlessly transformed itself into a cheerleading platform for Pope Francis following his election. You'd still almost think it was the liberal Catholic magazine The Tablet at times, so dogged is its coverage of Francis's every move.

Thus this morning's edition may have said it was beginning with the subject of Russia-Ukraine but the programme's approach to the story was to get David Willey on the line from Rome to tell Ed Stourton about what Frau Merkel said to Pope Francis on the subject, and about the Vatican's difficult position regarding the autonomous but Rome-facing Ukraine Greek-Catholic Church, which broke away from the Ukrainian Orthodox Church some four centuries ago. The Ukrainian church complains that Vatican diplomats "lean over towards the Russians" because of the worldwide Catholic Church's ecumenical hopes for reunion with the Orthodox world. This, David Willey said, is giving the Pope "a real headache". The Pope, however, is full of understanding for Ukrainian Catholics and made a "diplomatic" speech to his diplomats on the issue this week.

Ed and David also talked about the Pope's position of priestly celibacy, with David saying that the Pope "is very much aware of the problem, the pressures, in various parts of the world for allowing married priests...and of course now with the Ordinariate there are a load of former Anglican priests who are now priests of the Catholic Church. So he knows about the situation."

David Willey's tone when mentioning the Ordinariate (including the words "a load of") wasn't a strictly impartial one. There was something of a sneer to it. Tabletistas, including those on Sunday, never liked the idea of the Ordinariate much, as we've observed before. It was one of Pope Benedict's projects and brought in lots of disaffected Anglican conservatives/traditionalists.

Tune in again next Sunday for Radio 4's Tablet on Sunday.
Posted by Craig at 11:17