In an ideal world bloggers and Journalists would aim for clarity, brevity and accuracy.
Anyone who deftly manages to include context or give adequate, succinct background to a complex topic in a bite-size blog post, whilst neither treating the reader as an ignoramus nor expecting too much of them deserves admiration. 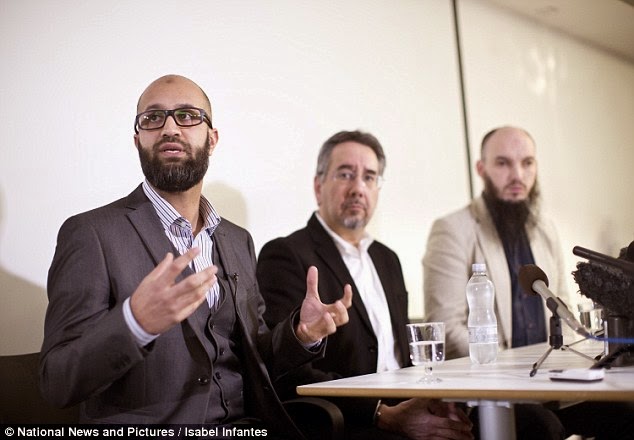 I wanted to write about ‘That-News-Conference’, but there was so much background, (Caged prisoners, Amnesty International, Moazzam Begg, Gita Sahgal etc etc.) that I couldn’t decide whether to assume the reader was familiar with it, or to start at the beginning of a tedious resume of everything I’d read, from 2010 to the present day.

As luck would have it I saw this piece in the Daily Mail, so I don’t need to worry now.

Nauseating! An odious press conference, apologists for terror and the do-gooders who fund them

I still want to add that I’m sure the BBC is growing more and more out of touch with normal people. Who at the BBC thought it was a good decision to give an unprecedented, undiluted, wall to wall chunk of exposure to those ludicrous clowns blaming our security forces for making the poor little ‘beautiful guy’ hack people’s heads off?

Apart from the BBC no-one thought it was a good move. it. Not the public. In fact several actual BBC people questioned it.  Nobody - even those in the media, apart from whoever orchestrated the coverage seemed to think it was the right thing to do.

The atmosphere in Britain is quite strange these days. Menacing in many ways. The state broadcaster constantly pumps out stultifying political correctness and pro-Islam propaganda that is so seriously at odds with the mood of the public that all sorts of people are beginning to notice it.   Not just people like me I must point out.

There was a Five Live phone-in thing. I’ve never listened to Five Live before; it was a first (and last) for me, however someone linked to it, saying that Nicky Campbell had been chatting with a professor who ‘got it right’, more or less. It turned out to be Anthony Glees.
He said that Mohammed Emwazi was radicalised before MI5 got their hands on him, not because of it, and the mysterious “radicalisation” was something to do with Westminster University, whose Islamic society hosts extremist preachers and Imams such as Haitham Haddad.

However, as soon as these facts had been established, and Nicky appeared satisfied that they had been, people began saying that beheading and suchlike is ‘nothing to do with (the real) Islam, it’s simple criminality, and moderate Muslims mustn’t be tarred with the same brush.

Cynicism and caution makes it hard to accept that Maajid Nawaz is 100% on my wave length. I mean he’s still a practicing Muslim, and I can’t be sure if he secretly harbours his coreligionists’ inherent antipathy to the Jew. That aside, his interview with Andrew Neil was quite convincing.
(Am I inherently anti-Islam, is he inherently anti-Jew, or both? Never mind for now.)

The BBC is busily indoctrinating us with an extreme version of political correctness, and in its own subversive way, radicalising the passive viewer. You mustn’t say this, you must think that, you must tolerate the intolerant; your prejudices and antisemitic tendencies must be disguised as something else. These days you mustn’t reveal your ‘bigotry’ by criticising Islam. I don’t think they can report you to the police or put you on a Bigotry control order (BPIM) but they can sure give you some pretty poisonous looks.

Even taking into account the BBC’s radical pro-Muslim position,  Asim Qureshi and Cerie Bullivant were still hard to take seriously. How could anyone fall for that bullshit?

Their far-fetched allegations were infantile, irrelevant and plainly ludicrous. Qureshi’s saccharine plea that Emwazi was ‘beautiful’ and ‘softly spoken’ and the accusation that MI5 ‘harassed’  the poor chap into a beheading spree were as illogical as they were stark raving ridiculous.

Their entire, simpering clownish performance was unworthy of the reverential questioning that came from the floor, and if any self-flagellating liberals were dumb enough to believe Emwaz’s knife-skills are somehow our fault, and if the implausible answers they heard weren’t enough to arouse serious misgivings about their own gullibility that would be obvious to anyone sane, surely the twosome’s appearance alone should have been enough to crack a smile in the innermost subconscious of the most ernest of a BBC /PC worshipper.

Qureshi with his materialistic, western, capitalist’s trendy suit and specs, the upside-down effect of hirsute chin and shiny bald head, the unsightly prayer-bruise, (probably a badge of honour) and his wall-eyed, buck-toothed sidekick Bullivant with the pubic-hair fuzz on his chin and the dark shirt, allegedly worn at all times to camouflage the sparseness of the beard.
I’m waiting to hear it was all a stunt by some clever impressionists.You don’t get clever impressionists these days though, do you?

Why give these  parodies of nobodies any air time? If their ludicrousness isn’t enough to make them a laughing stock, there’s You Tube. Qureshi preaching hatred in 2006. Are the BBC aware of that? If not, they’re the only ones who aint; and if they are, shouldn’t they be putting these fools in context and treating them with the disdain they deserve?

Jihad is just ‘the right to defend oneself against the west’  claims this twit. He’s winging it here, when confronted on CNN. Watch this. He’s beginning to have doubts. He’s not completely sure anyone but the BBC is falling for it.

The whole escapade was nothing more than a publicity stunt for these clowns. I don’t think publicly identifying “Jihad John’ makes one jot of difference. So what if we know his name  So what if we don’t. We know he’s a Muslim. Duh!
We know he was exposed to extreme Islamist preachers at one of this country’s many traitorous universities that are rife with antisemitism and hatred of the country that has gifted them the freedom to hate it.