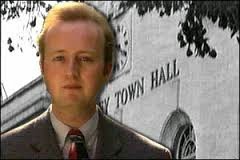 Taking about Steve Richards and BBC bias (as we were)...

Today's Dateline got off to a weird start. Steve Richards of the Independent was playing his usual "lickspittle of the political establishment" role over MPs' pay and expenses and both Roger Cohen of the New York Times and Maria Margaronis of The Nation then started denouncing undercover journalism. All four guest expressed sympathy for Sir Malcolm Rifkind. 'It's a great shame for him and terrible, dishonest journalism from Channel 4' was the general consensus among the profoundly left-liberal Dateline panel.

Besides the biased weighting of the panel overall, the very odd thing about the programme's coverage of this story was the lop-sided way it was set up.

If you've followed the Sir Malcolm Rifkind/Jack Straw story this week, can you see any imbalance in presenter Shaun Ley's way of introducing? (and, if you can't, please hurry along to SpecSavers):

...and a former British foreign secretary caught in a media sting insisting he should be allowed to top his inadequate parliamentary pay.

Let's talk about someone else who's been in the headlines this week: Sir Malcolm Rifkind, who was one of Britain's most prominent Conservative politicians. He was a cabinet minister under Margaret Thatcher, rose to be foreign secretary and until this week he chaired the Intelligence and Security Committee. He and another former foreign secretary were secretly filmed pitching for work with a Chinese company. The company was fake, set up by journalists trying to catch out politicians. Now, it's not illegal in Britain for politicians to earn money outside the day job but Sir Malcolm's defence that "I do want to have the standard of living that my professional background, a lawyer, would normally entitle me to have" went down so badly that Downing Street withdrew its support and he's now quitting as an MP.

Only when Maria Margonis, several minutes later, mentioned the name "Jack Straw", did Shaun Ley feel the need to clarify that Mr Straw was the other "former foreign secretary" who'd been stung (without naming his party).

Yes, Sir Malcolm made the most memorable remarks and held a key select committee job, but Jack Straw was, in many ways, a much bigger - and certainly better-known - political beast. Why choose not to mention him (or his political party) by name at the start?
Posted by Craig at 14:14