While hundreds of Rotherham girls were being groomed abused and raped and their complaints ignored by the police and the council, MP Sarah Champion was sitting at a large table with about 16 Asians and one ‘white’ man, saying  ”Personally this is something I’m very passionate about”.
No; not about that. You’d know if you watched the video. Her passion was about Palestine, where, according to Sarah Champion “so many civilians are being murdered and so many more are having to flee their country.” Of course this was taking place in the summer of 2014, during Operation Protective Edge, when the BBC and all the other news channels were disproportionately bombarding Britain with graphic images of what they insisted was Israel’s disproportionate bombardment of Hamas.

“The violence that Israel is showing is completely disproportionate as far as I am concerned” said Sarah Champion.  “Our government has really got to do something to create a ceasefire because it’s untenable, this level of violence.”

“I’m terribly glad that Ed Miliband has come out incredibly strongly against what Israel is doing [.....]I’m seeing the people in Gaza being slaughtered”

She is indeed seeing the people in Gaza being slaughtered. She’s seeing the dead and injured paraded before the cameras at the invitation of Hamas, and she’s seeing it courtesy of the BBC. 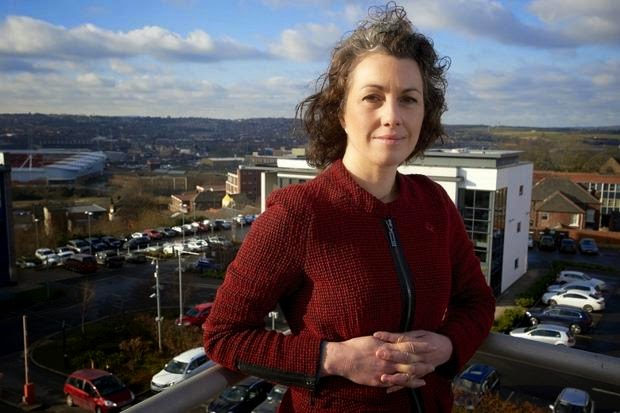 The flaw in western democracy is that in order to function as intended, voters should be engaged enough to go out and vote and (reasonably) well-informed enough to understand what they’re voting for. Ever since the Labour government decided to secure its position ‘forever’ by importing hoards of potential Labour supporters willy nilly from the undemocratic third world, the western democratic vision has fallen apart.

If the financial crisis hadn’t come along when it did, this ploy might have succeeded, and who knows how much worse things could have been. Remember the ‘democracy’ that brought in fanatical Islamist regimes during and after the farcical Arab Spring? The BBC didn’t get it at all. Even now people are still calling  Hamas ‘democratically elected’. Once elected, majority rule says democracy has reached the terminus, and the bus will never move on again.

Sarah Champion must pander to the followers of Allah, or else. If she doesn’t someone else will.

“The definition of Islamic democracy (contrary to western democracy) is simply that the government is essentially Islamic and it is controlled by whichever sect, tribe or group has the majority of members. This is always the essence of democracy: rule by the majority. In Iraq and Iran the majority groups are the Shiites. Therefore the only possible type of democratic government in Iraq and Iran is a Shiite Islamic Republic. The majority (i.e. Shiites) of Iraqis want democracy, but they want Islamic democracy not the American style of secular democracy. Whenever Bush uses the word democracy, he means western secular democracy. Whenever the Iraqi people use the word democracy, they mean Islamic democracy. The difference between these two concepts is crystal clear to anyone who takes the time to think about it.

For ‘Bush’ you can easily insert ‘the BBC’.

Since much local politics has been taken over by Pakistani or Bangladeshi Muslims, antisemitism and the anti-Israel lobby rules okay. See what is happening at Tower Hamlets. See how Sarah Champion is duped, first by the BBC’s inflammatory reporting, then by the necessity of pandering to her constituents. She has to, otherwise she’ll be out on her ear.

There was a huge puff piece about her by Damian Whitworth in last week’s Times (£). Michael Cockerell’s ‘Inside the Commons’ has propelled Ms Champion to a more favourable variety of prominence than would have been the case had she not starred in the first episode of the programme.
Here is an excerpt from the Times:

“Sarah Champion is one of the few politicians in Rotherham to have emerged from the child sexual exploitation scandal with any credit. She describes herself as a “freak” among MPs who was regarded with suspicion by colleagues at Westminster when she agreed to take part in the fly-on-the-wall TV series “Inside the Commons”
She is loathed by many members of Rotherham’s disgraced local Labour party, and is so unimpressed by traditional squabbling between the political parties nationally that less than three months before a general election she is happy to describe David Cameron as “decent”and held a private meeting with him to try to advance the cause of abuse victims.”

Call me cynical but some of her behaviour, her remarks about Nigel Farage for example, don’t coincide with this spin.

I agree with Craig that “Inside the Commons” is an enjoyable and fascinating series. The viewer was given privileged access to some of the mundane, everyday, housekeeping aspects of our great parliamentary institution, and we could glimpse some familiar faces coming and going, but we still knew that the  editing sets the tone. Editing is the master. I’d love to see what ended up on the cutting room floor. No I wouldn’t - it would mostly be boring stuff, but you know what I mean.

The ones who ‘agreed to take part’ must have had an idea of how they were likely to come across. Fly on the wall films are not random. Otherwise how come we saw Steve Rotheram MP the former brickie on his roof, dismantling a chimney? If he didn’t want to be seen as a brickie he could easily have not performed this rooftop exercise in front of the cameras.

An MP who was sitting in Rotherham at the time of an enormous scandal would normally be bearing the brunt of a barrage of criticism. But somehow Sarah has come out smelling of roses.


Acting on behalf the abused women and passionate about it.
Posted by sue at 16:31