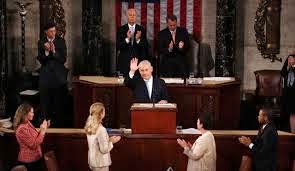 And talking about Dateline London...


The closing discussion was on PM Netanyahu's upcoming speech to the U.S. Congress, at the invitation of Congress. Given the strongly left-liberal composition of the panel, the way the discussion went can probably be predicted.

Roger Cohen (who's sympathetic attitude towards Iran and regular criticisms of the Israeli government perhaps explain the programme's invitation to him to appear) described it as a "deeply divisive" move and "a huge gamble". He also backed President Obama and said that Mr Netanyahu's proposals over Iran would mean (if acted on) that "we're moving down the warpath".

Maria Margonis criticised the U.S . Republicans and Mr Netanyahu, saying "I  think he was wrong to accept" and that, in contrast, Mr Obama had been "very dignified", "very elegant" about the whole thing.

Ashis Ray said that "there is no better proposal from Mr Netanyahu on the table", that he's only going "to get  the standing ovation", and that a "rapprochement" between the U.S. and Iran would be "good for the world".

Steve Richards agreed, adding that a "rapprochement" between the U.S.and Iran would be "very helpful to Israel as well" in the long run, that "this is a hugely insensitive thing for Congress to do" and that "I don't blame Obama".

You may or may not agree with them, but this is precisely the kind of smoothly-brought-about left-liberal consensus-building that (sometimes) gives Dateline London a bad name (bias-wise).

Much more attention should have been paid to this week's guest selection, knowing the subject, to ensure the presence of at least one strongly dissenting voice.
Posted by Craig at 15:04