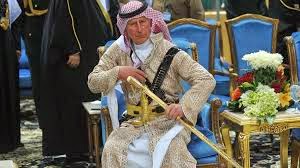 Here's on open-and-shut case of demonstrable bias from a star BBC presenter.

Jonathan Dimbleby made his usual appearance on PM yesterday plugging that evening's edition of Any Questions. As ever, he previewed some of the topics that might come up, including:

...and, who knows, the heir to the throne, yet again the subject of a frenzied media scramble for headlines...

...from which we can take it that JD thinks HRH Prince Charles has been hard-done-by ("yet again"..."subject to") and that he, JD, thinks the stories aren't worth the paper they're printed on ("a frenzied media scramble for headlines").

You might suspect from that that Jonathan Dimbleby is biased towards the Prince of Wales...and it wouldn't be unreasonable to suspect that given that JD is a well-known friend of Prince Charles.

...as I was only just saying to my African violets and begonias. ("We agree. We like Prince Charles too," they replied.)
Posted by Craig at 21:56